Sheffield United’s late promotion surge may appear improbable but is altogether possible – in no small part down to the prolific form of their front two strikers.

England international James Beattie, one of the division’s top scorers with 21 goals, and Billy Sharp, one of Britain’s most prolific marksmen in the last two seasons, have combined together to score 10 goals in United’s last six games and have been a major catalyst in the revival that now allows fans to dream of a remarkable end to a mediocre season.

10 in 6: Beattie and Sharp’s prolific partnership has
propelled United into 11th position in the Championship.

Beattie has recently placed on record his commitment to Sheffield United amid fears that he may leave in the summer, and the desire of Blades fan Billy Sharp is obvious for all to see – even when his dream move threatened to turn into a nightmare, the former Scunthorpe man’s determination for the cause never wavered.

The success of the partnership has led to comparisons between Brian Deane and Tony Agana, the prolific marksmen who fired United to success in the 1990’s. With three games remaining and United five points adrift of Crystal Palace in sixth, and Beattie and Billy in such prolific form, can Kevin Blackwell emulate the success of Dave Bassett and write himself into Sheffield United history? 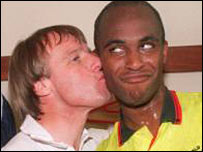