A bit of luck sends Ghana through – Ghana 2-1 Tunisia

Ghana progressed through to the semi-finals of the African Cup of Nations after a goal-keeping mistake in extra time handed the Black Stars the win in an otherwise evenly matched encounter.

Black Stars captain John Mensah put his side ahead after nine minutes, before Sabeur Khalifa equalised for Tunisia just before half-time.

The game ended 1-1 after 90 minutes, and remained level until a Tunisia mistake gifted Ghana the winner which Andre Ayew gratefully converted. 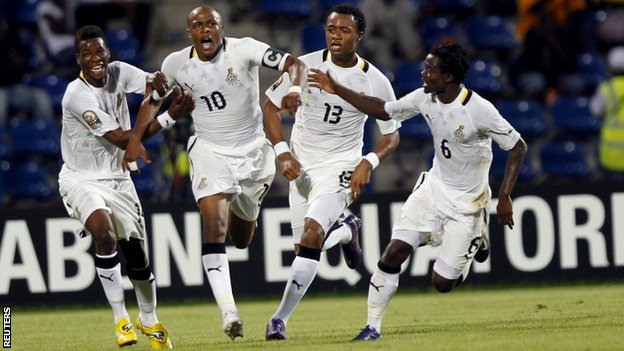 Black Stars captain John Mensah was recalled to the squad for this fixture to partner John Boye in defence. Former captain John Paintsil was retired to the bench as Sulley Muntari returned to the starting line-up. Anthony Annan bravely started following the death of his mother on Thursday.

Tunisia made four changes to their squad with Wissem Ben Yahia, Issam Jemaa, Anis Bossaidi, and Rami Jeridi all out to be replaced by Mejdi Traoui, Dhaoudi Zouhaier, Aymen Mathlouthi and Aymen Abdennour.

Ghana started the game brightly and after just nine minutes John Mensah who was returning from suspension had the ball in the back of the net when he headed home a corner from close range.

The Black Stars heavily dominated the first half but Tunisia perhaps felt luck wasn’t going their way when they had a strong penalty decision turned down after Samuel Inkoom pushed Sabeur Khalifa off the ball in the area.

This may have been Tunisia’s only forward run of the game but it should have served as a warning to Ghana as just ten minutes later the Eagles were back on level terms when Zouhaier Dhaouadi chipped in a cross to the back post for Khalifa, who headed in decisively past the diving Adam Kwarasey in the Ghana goal just before half-time.

The goal brought Tunisia back into a game that realistically Ghana should have had dead and buried by the break but now the Eagles had grown in confidence and were passing the ball around comfortably. Although it was still Ghana who were having the best of the chances with Kwadwo Asamoah latching onto a loose ball on the edge of the area but blasted his shot way over the bar. Asamaoh Gyan then turned sharply in the box only to see his shot go just wide of the right post.

Tunisia’s only real chance of the half came after a lovely one-two in the box between Khalifa and Youssef Msakni, who fired just over when it seemed to be heading into the roof of the net.

Tunisia seemed to have one clear game plan; take the pace out of Ghana’s play, and it worked as the game finished 1-1 after 90 minutes.

The tension was now on and despite both sides looking tired just seconds after the re-start Tunisia had the ball in the back of the net only for Issam Jemaa to be judged offside. Tunisia continued to pile on the pressure as they tried to steal the match but 10 minutes into extra time a mistake by Aymen Mahtlouthi in the Tunisian goal handed Ghana the lead. Mahtouthi, who was having an excellent night in goal, spilled the ball from a harmless cross right in front of Andre Ayew who gratefully tapped home.

Tunisia struggled to recover and their task of finding an equaliser was only made harder when Aymen Abdennour’s elbow on Ayew earned him a red card as the game turned heated. The Eagles could have easily been down to nine men minutes later when Oussama Darragi, who had only just came on, was lucky not to be punished for a very high, studs-up, challenge on Ayew.

After that all Ghana had to do was defend as they made the most of the man advantage and defend they did as despite numerous desperate attempts from Tunisia they just couldn’t break through the back line.