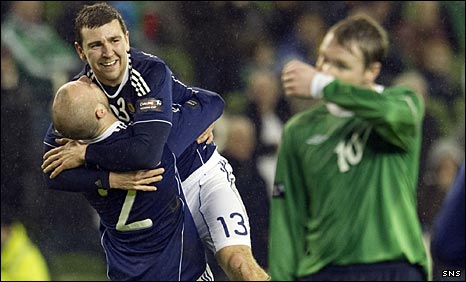 SCOTLAND secured a 3-0 victory over Northern Ireland in Wednesday evening’s Carling Nations Cup match at the Aviva Stadium after dominating Nigel Worthington’s side for most of the game.

First half goals from captain Kenny Miller and James McArthur gave the Scots a lead going into the break, before Kris Commons sealed the victory with a goal just after half-time.

James McArthur then extended the lead on 32 minutes with a delightful chip from the edge of the area. McArthur admitted post-match that his spectacular chip was actually a cross and few would have believed him if he had said it was a shot, considering his head was not raised when he struck the ball.

Commons then put the game beyond doubt by finishing from six yards after an excellent passing move by Scotland. Sustained pressure and possession combined with clever movement by Commons opened the Northern Irish defence up allowing him to slot home. 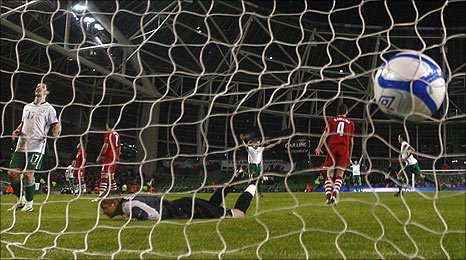 Second half goals from Darron Gibson, Damien Duff and Keith Fahey secured the victory for Giovanni Trapattoni’s men, whilst inflicting defeat on Wales in Gary Speed’s first game in charge.

Manchester United midfielder, Gibson struck the opener on the hour mark with a fine right footed drive from 30 yards. After a neat one-two with Glenn Whelan, Gibson surged forward before unleashing the wonder-strike which left Welsh goalkeeper, Wayne Hennessey with no chance of making a save. 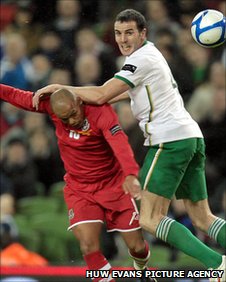 Seven minutes later, Damien Duff capitalised on suspect Welsh defending by smartly finishing off a move from inside the box. The winger found himself in a more advanced position after pressure was put on the Wales defence, leaving the Fulham man with the simple task of tucking away Ireland’s second goal.

Keith Fahey completed the scoring direct from a free-kick after 83 minutes. The substitute bent his shot around the Welsh wall which nestled into the bottom right corner past the outstretched Hennessey.

The win puts the Irish joint top of the table with Scotland and leaves Northern Ireland joint bottom with Wales.

Next up on the fixture card for the competition is at the end of May, when the Republic face rivals Northern Ireland with Wales up against Scotland the following night.  The last round of fixtures could be what decides the winner as both teams who won 3-0,  the Republic and Scotland, face each other in the Aviva Stadium.

A tribute to Athletic Bilbao’s Jose Etxeberria
The Relegation Race: Who’ll Drop And Who’ll Not?