A 2-0 win over Benin in their final Round 1 fixture means Egypt top Group C with an untarnished record. Having taken a 100% record in the tournament into the match, Egypt knew the result would have no bearing on their progression from the group, but Hassan Shehata still wanted to take the current momentum into the quarter-finals.

Two first half goals were enough to seal the three points, with Ahmed Al Muhammadi opening the scoring with a stunning, if slightly bizarre, cross-shot that looped over Yoann Djidonou in the Benin goal. Emad Moteab put the game beyond Les Écureuils when his rebounded effort was deemed to have crossed the line.

The Pharaohs made a confident start, and Al Muhammadi’s eight minute goal epitomized his side’s mood in the opening stages. Either a sensational lob or a wayward cross, whichever you choose to believe, caught the unsuspecting Benin ‘keeper off his line. Benin did, however, show great character, as they began to take they game to Egypt. The best chance fell to Pascal Angan, when he spotted Essam El Hadari who had strayed off his line. Angan’s chip had the beating of the experienced goalkeeper, but the ball bounced just wide of the post.

Les Écureuils went on to vaguely threaten from a couple of long-range efforts, but after 24 minutes Egypt showed why they were champions at the last two tournaments by effectively killing the game off. Djidonou impressively diverted Ahmed Raouf’s header onto the post, but Moteab was on hand to convert from the rebound which fell kindly to his feet. Djidonou thought he had prevented the goal when he batted the shot out, but the linesman’s verdict was that the ball had crossed the line. 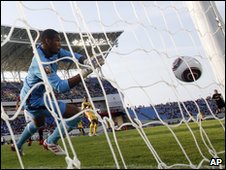 The goal seemingly allowed the Pharaohs to get into their stride, and Raouf could have made the situation even better minutes later, but his header was easily saved. Still, at 2-0, Benin still felt that they had a chance of retrieving the points, and their place in the tournament, and a decent effort from Djiman Koukou preceded by a good move would have added to that feeling.

Egypt captain Ahmed Hassan was starting to boss the middle of the park as the second half commenced, and played Moteab through for a chance to further extend the lead, but an alert Djidonou was able to smother the chance at his feet.

With the game seemingly out of reach, Benin started to trouble the Egypt defence for the first time since the break. Omotoyossi and Adou both had opportunities from close range, but neither could take advantage. Whilst at the other end, Mohamed Zidan, who had come on as a substitute after being rested, forced a good save after bamboozling the Benin defence with some fancy footwork.

So whilst Egypt go through to face a talented Cameroon side in the quarter-finals, Benin fall out of the competition. Les Écureuils had to win to have any chance of progressing, but in the end Egypt were simply too good. Their manager Michel Dussuyer does, however, feel his side can be proud of their showing over the three matches.

“We were unlucky not to make the impact we had hoped for here,” he said.

“We have taken some lessons from this experience and we will continue to work hard for us to do far better next time.