Ghana drew 1-1 with Guinea on Wednesday in their final group D fixture which saw them advance through to the next round at the expense of the Syli National who had to settle with third place in the group after Mali beat Botswana 2-1. 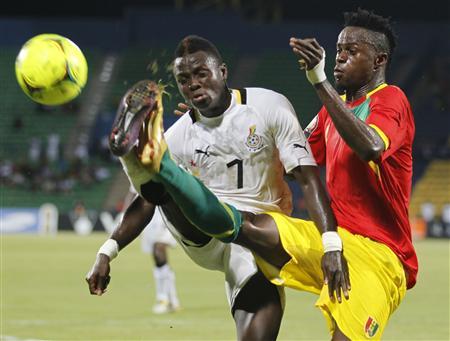 Dussuyer lashed out at the official after the game for only penalising Guinea in the first half of the match; “in the first half all the fouls were against Guinea when we all know that this is a very physical game.”

“Ghana are a great team, but they did need the help of the referee to go through. I am disappointed and angry.” stated Dussuyer.

He also questioned the first booking Mamadou Bah received before he was eventually sent off.

“The first yellow card against Bah was not deserved,” insisted the French coach.

Experienced referee Bennett was slow in taking decisions and turned a blind eye to several late tackles as both teams made a combat of this clash in the last half hour.

Despite the criticism Dussuyer insists that Ghana are still his favourites to win the tournament.

“I said it before the tournament that Ghana are my favourites to win this competition and even after how the referee helped them against us I still believe they can go all the way here,” said Dussuyer.

“They are a very organised team. They are a great team and against such a team you cannot afford to make any mistakes like we did against them.”

However pundits have disparaged the Black Stars for their lacklustre performances in the tournament so far prompting assistant coach, Kwesi Appiah, to say Ghana need to raise their game.

“I believe we will raise our game to reach the semi-finals,” he said.

“In our opening game against Botswana, we did not play at our level. But for the second game against Mali, we played at about 70 per cent of our capacity.

“The team has not played to its potential yet.”

The Black Stars, who are chasing their fifth Nations Cup in three decades, face Tunisia in their quarter-final match on Sunday.