Stoke’s Jamaican international winger Demar Phillips has been allowed to leave the club on a free transfer and has signed a three-year contract with Norweigan side Aalesunds FK. The 5’6” left sided player was brought to the Potteries on transfer deadline day August 2007 from Jamaican club Waterhouse but failed to make an impact, making just two substitute appearances in his eighteen months at Stoke.

I get the distinct impression that the 25 year old was signed to keep then star player, his Jamaica teammate Ricardo Fuller happy, and never really possessed the attributes necessary to succeed in the higher levels of English football, his diminutive stature being a negative point in a physical Stoke side. Many Caribbean players seem to do well in Scandinavia, and I wish Demar all the best in his fresh start.

Meanwhile, it has emerged that Stoke opted not to take up their option to sign midfielder Rudolph Austin, another Jamaican, at the end of the transfer window. He will, co-incidentally, remain in Norway where he is currently on loan at SK Brann. 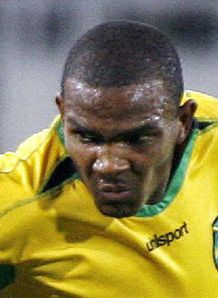 Austin will not join Stoke