Mali grabbed third place in the African Cup of Nations 2012 after beating Ghana 2-0 in game where the Black Stars practically failed to show up.

Forward Cheick Tidiane Diabate stole the headlines in a repeat of the group stage fixture, where Ghana won 2-0, as he struck twice. The Ghanaian team, who really lacked confidence in this game, saw their side reduced to 10-men for the third time in the tournament when Isaac Vorash saw red which all but condemned them to defeat. 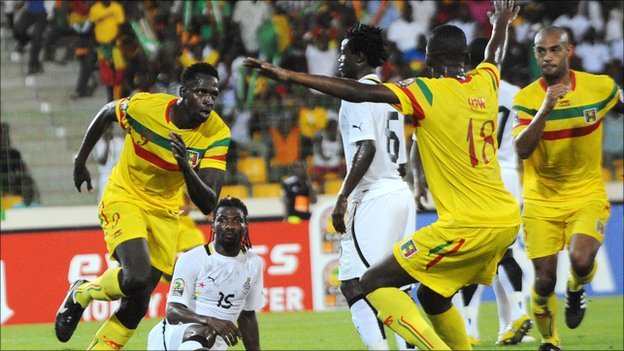 The third place play-off is the game no team really wants to be involved in. It’s basically a celebration of the losers, rubbing in the fact they came so close to the trophy but are yet so far away from it, so it was really no surprise only a few thousand fans turned out to the match.

Coach Goran Stevanovic opted to experiment with his team in this fixture perhaps showing he wasn’t really that bothered about winning. Surprisingly Asamoah Gyan was missing from the Ghana team for this match following his penalty miss in the semis against Zambia leaving the Black Stars without any recognised striker in the pitch. Instead brothers Jordan and Andre Ayew played up front. Agyemang-Badu was still absent through injury and Derek Boateng and John Boye were missing through suspension.

Picking a team was much easier for Mali coach Alain Giresse as he only had 19 players to choose from due to injuries to Modibo Maiga, Mahamadou N’diaye, Ousmane Berthe and Drissa Diakite.

In a relatively quiet first-half it was Mali who had he better chances. Their first chance came after five minutes when an in-swinging corner went deep to the back post but Ghana were able to block a close-range effort. The next chance for either side didn’t come until 20 minutes when a mix-up with the Ghana defence almost allowed Dembele a chance to poke past Kwarasey but the goalkeeper came out well to gather.

With the Eagles having the best start to the game it probably wasn’t that surprising that it was them who opened the scoring on 23 minutes. A corner was played into the back post and fired low at goal by Diakite but his shot was spilled by Kwarasey leaving Cheick Tidiane Diabate with the simple task of tapping home from five yards into a gaping goal.

Ghana seemed to be treating this game more like a friendly than an AFCON game experimenting with a new formation but after hardly seeing the ball and having very little chances in goal in 35 minutes coach Goran Stevanovic finally decided to chance things up bringing on frontman Prince Tagoe.

Yet even this substitution couldn’t change the play if the game when one minute before half-time Mali should have been two goals up after Diabate beat the Ghanaian defence and was though on goal only to be wrongly flagged for offside.

Ghana did look brighter in the second period; they even managed to get the ball in the back of the net on 52 minutes but a knock-down by Isaac Vorsah to Sulley Muntari was judged to be offside, it was a very tight decision that could have gone either way. However any hope of getting back into the game were dashed when Vorsah received his second yellow card of the game and subsequently  a red card just after the hour mark.

From then on Ghana really were out of the game and on 76 minutes Mali had third place in the bag when Diabate scored his second. Adama Tamboura cleverly played his way down the left wing before delivering in a fine cross to Diabate who coolly converted.

Late on, Andre Ayew should have reduced the deficit but volleyed well wide from a fine position before his brother Jordan hit the corner of post and crossbar with a well-struck volley.