As the football world prepares to descend on Africa this year the continent must first deal with old flagship event, the African Cup of Nations. With the tournament less than a week away we take a look at Mali in their bid to ditch the historic underachievers tag and claim their inaugural title in Angola.

Landlocked in Western Africa, Mali is the seventh biggest country on the continent with a population of around 13 million people. A former French colony until independence in 1959 the country motto is one the national team will need to enforce if they are to record their maiden Nations Cup triumph.

“One people, one goal, one faith” are the words coach, Stephen Keshi, will have ringing in his players’ ears prior to each match. The Nigerian captained his national side to glory in the 1994 competition and his managerial savvy surprisingly saw him qualify Togo for the 2006 World Cup.

Using an invitational tournament in Qatar as an appetizer for Angola, Keshi set out his expectations for the ANC, “I know we are not among the favourites, but we are optimistic that this team can go as far as the final. You only need to look at the calibre of players in this team, the body language, attitude and spirit, so I’m not totally ruling us out of the trophy,” he said.

Keshi’s words are brave, but the Eagles will have to add something with a little more substance to emerge in Angola. Viewed as outsiders to receive a World Cup berth in South Africa, with qualification for both tournaments combined for the first time, they topped their opening group containing Sudan and Congo. However, their progress to South Africa was halted shortly after, finishing third in the next group stage alongside Sudan (again), Ghana and Benin. A defeat to the Black Stars and a series of draws ended their World Cup hopes, but Mali were safely on the plane to Angola as they ended four points behind Ghana, a point behind Benin and eight clear of the Sudanese.

So if current form isn’t the recipe for success, the Eagles are unable to take much comfort from their history either. Since the tournament’s inauguration in 1957, Mali have only been represented on five occasions. 1972 was the closest they came to winning after being defeated 3-2 by Zaire in the Final and producing fine players such as Bako Toure and Fantamady Keita. They have also recorded three fourth-placed finishes, including 2002 when they hosted the event. 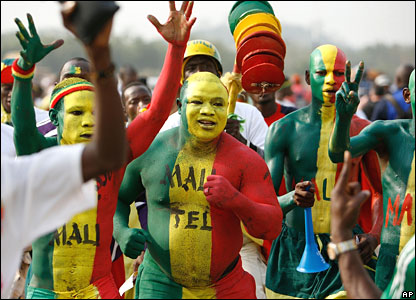 Mali will help kick-start the competition when they face a daunting opening assignment against tournament hosts, Angola, in Luanda on January 10th. Facing a host nation at any stage in a major tournament is difficult, but with the Black Antelopes hosting its first major soccer event and a partisan crowd in their favour, Mali’s focus and discipline will be essential. They will need to be wary of flair Angolans, Gilberto and Flavio. However, if they can stifle the opposition for long periods and frustrate the crowd, here lies Mali’s best hope of victory.

Group favourites and World Cup qualifiers, Algeria, are next up four days later. Although the Algerians will represent formidable opponents, Mali will hope they take advantage of a potential qualification hangover. Despite missing out on two previous ANC’s, the Desert Foxes would be lying if they said one eye was not set on South Africa. The Malians will also have to overcome a more physical opponent in this fixture if they are to remain on course, although winger Karim Ziani could provide a creative threat.

The final fixture of the group could prove beneficial for the Eagles. Malawi are certainly the whipping boys and if Mali can snatch a win or two draws from the opening matches, a good win here could set them on their way.

Despite avoiding some of the tournament favourites Group A still offers an apprehensive prospect for Mali. It will be crucial that star players Frederic Kanoute and Seydou Keita perform well, but more important will be that some of the less established squad members rise to the occasion. The team has not had much glory over the last four years and will need to improve their game in order to progress. With Angola hosting the event and Algeria in fine form, this could swing the pendulum their way.

Prediction: Outside chance of quarter finals but expect group elimination.

Mali – can the Eagles spread their wings?