Manchester City were plagued with injuries in this game so Bellamy, Benjani, SWP, Kompany and Bridge all missed out after our UEFA Cup defeat to the impressive Hamburg. City would have been tired after their long trip but this did not stop the boys playing some good football at times. However we lost AGAIN at home against Hodgson’s competative side. We can never sit on a lead, we simply don’t have the concentration required. 1-0 up at half time and we lose 1-3. Typical. 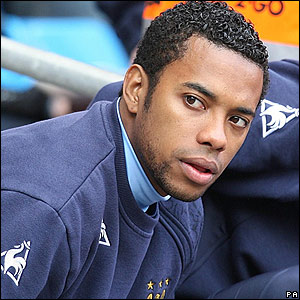 Robinho started on the bench, but was needed late on.

Last time we played them at home we were 2-0 up at HT and they ran out 2-3 winners. At their place we drew 1-1 earlier on in the season. Bullard scoring a superb solo goal (see below) after Benjani had given City the lead early on. HERE ARE MY PLAYER RATINGS FROM THE GAME >>>

Shay Given (GK) – If we are being honest, he did not have much to do at all. One time I can remember is when Dunne slipped and he made a smart, rushing-out save against Zamora early on. Was looking to waste time after about 38 minutes which was crazy! I thought though that Given’s position should be questioned for their goal, think he should have done better. The first goal he has conceded at Eastlands and the second soon followed. He again (I think) wasn’t expecting a shot and thus wasn’t prepared. His punch from a powerful Simon Davies freekick was simply abysmal and nutmegged for the last goal. Hero to Zero. 5

Micah Richards (RB) –  Marking a skillful Dempsey he did a good job and looked fitter than usual. Fantastic athlete, putting his body on the line many times in the game. Always gambled and stayed tight to his marker and didn’t let him run. Whipped in some delightful balls from out wide and created a few chances. Still learning his trade but he did impose himself on the game. It’s good to see him so high up the pitch and he was willing to get back and cover. Had one rash shot where he got his technique all wrong but we can’t expect much from him in that department. Covered well for the CB’s on occasions too, notably early on in the second half. Not at fault today, well played, but did give away too many freekicks which reaked havoc in the defence. 7.5

Richard Dunne (CB) – Dunne is a good captain, solid and a good leader and he looked up to the task today although I wasn’t sure if it would be our day when i saw him slip over and Given save our blushes! Not at fault for the first goal, infact made a good challenge on Zamora and it was just a shame that the ball fell so nicely to Dempsey. Couple of decisive blocks as Fulham searched for their third goal, but nothing less than you expect from a Premiership footballer. Dunne was caught out when he tried to intercept a through-ball on the half-way line and Zamora ran through before slipping the American Dempsey clear for the third goal. 6.5

Nedum Onouha (CB) – I’ve been disappointed with him recently, after his outstanding performances earlier on. This is his 15 game on the trot in the team but he had a poor clearances time and time again with no purpose. Looked tired at the end as he wasn’t brave enough to tackle Zamora (which led to the third goal) and didn’t play with his heart on his sleeve. 5.5

Javier Garrido (LB) -Didn’t really see him much in this game but that has it’s positives. He therefore did nothing to stand out, but did nothing to make me have a go at him . He did send in some lovely corners though, and perhaps we didn’t make the most of them. 7.5

Kelvin Ethuhu (RM) – Full of running in the early stages, and won some corners bringing up the big men! Didn’t really look to go forward as much as for that reason his brother outshone him! Plays far too wide on the line and not very narrow, whilst I agree he needs to drift, he just stayed there rather than moved inside. Used his wing to good effect most of the game with Richards. He robbed the Fulham full-back every now and again and it was good to see him having missed most of the season through injury. Often tried to do too much and sometimes it just did not work. Gave all he had, which is nice to see, but SWP more suited to that role. – 6 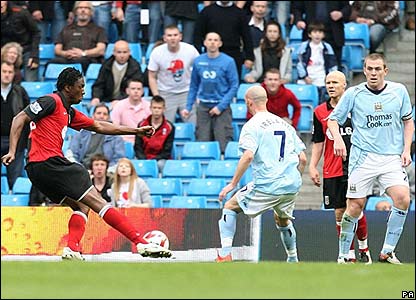 Stephen Ireland (CM) – Having accused some of his team-mates as not being brave enough and he got the boys going today very well IN THE FIRST HALF. He travelled from deep inside our half and kept on running to score a superb goal after 25 minutes. Every attack went through him today, he wanted the ball, looked lively and played in a slightly more attacking role to usual. BUT that all changed in the second half where he dropped back much more to allow Sturridge to drift up and play behind Evans. Faded out of the game which we are not used to seeing. Some would say you were not brave enough Superman? 7 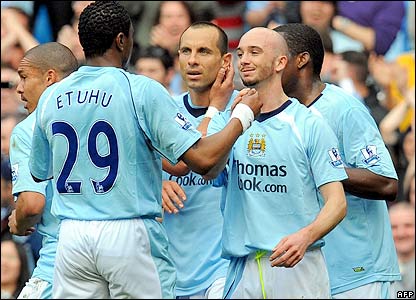 Pablo Zabaleta (DM) – Having been subjected to a horrible tackle by Konchesky after around 20 minutes he didn’t do too badly. He always wants to fight and do well and this was shown on numerous occasions, chasing down the Fulham defenders and even playing a delightful ball to Bojinov upfront. He always wants to be a part of the passage of play. Links up defence and attack with dedication. Often nipped in and stole the ball from the likes of Murphy and he was superior in midfield. Ran the midfield with precision and looked a very good, capable player. BUT at fault for their goal, unlucky though, could have been anyone but it was him who carelessly gave away possession, just unfortunate it had to be him as he was playing very well up until that point. Drifted away after Fulham got their second, as everyone did. 7.5

Nigel de Jong (DM) – Having been a spectator against his old club Hamburg he did very well and slotted back into his role very nicely. He often got the better of him when he went on these casual runs and he appeared more confident. He is one of those players who you know what you will get. Very assured on the ball with AJ raring down on him in the first half but looked anxious in the second period. He slowed play down and tried to be methodical. Looks like he can only play when Vinnie is there which is a great shame. Not his best game…infact, one of his worst. He gave the ball away to Dixon for the second and it was a lazy ‘hoof’ out.  5.5

Martin Petrov (LM) –  Looked lively as it has been a while since City fans have seen him run at defenders. Credit must actually go to Pantsil who played very well against Martin today. He chased everything down in attack and defence and it is certainly good to have him back. He adds tempo to the game even when City are not at their best. Didn’t look 100% fit but again, he is never willing to put his body on the line. 6.5

Valeri Bojinov (ST) – Even if he is not going to win the ball he must try and distract the defenders more than he did. This is proven in the fact the Fulham ‘keeper was not tested in the first 20 minutes? Just not good enough. On far too many occasions he was crowded out and can thus be deemed ineffective. After 30 minutes he had a shot after Haangeland had given the ball away, but this was a mistake as Zabaleta (who had won the ball) was in acres of space and he should have played it to him. Struggled quite a lot and subbed early on in the second half. 5

Referee (Mark Halsey) – Evened things up having made a sublime interception, breaking down a rare Fulham attack but then didn’t give a blatant foul on Bojinov! He did a good job to be fair. 8

Manager (Mark Hughes) – Got his team fired up and rested key players, but also put a strong enough side out to win but again they just did not produce the goods. His half time team talks are obviously far too soft. VERY FRUSTRATING. 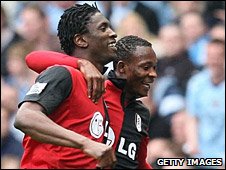 Ched Evans (ST) – Evans gives you physical presence and we had not had that until he came on. Just 20 years of age and he is one reason that City fans have something to smile about. Added a new dimention to the game. held the ball up well but just did not have the support around him that he wanted/needed. He had a willingness to run but wasn’t able to do much. When Robinho and Sturridge came on he wasn’t really involved much. Had a header very well saved having risen magnificently and he won two corners.

Daniel Sturridge (ST) – Another player struggling with injury recently, but good to see him back. Played an equisite ball to Robinho early after Fulham’s second goal and tried to link up play well. Not short of confidence, his dribbling skills were good but his finishing was not as good as we have been accustomed to see. Tried to do it all himself and it just wasn’t working – needs to learn.

Robinho (ST) – Without a goal in 2009, today should have been the time. Pass the ball or keep the ball, that’s all he needed to do. Looked lively when he came on and almost had a quick impact, had a good shot well saved. Drifted out of the game late on when it was clear Fulham had done us over, 2 shots…that’s all I counted. 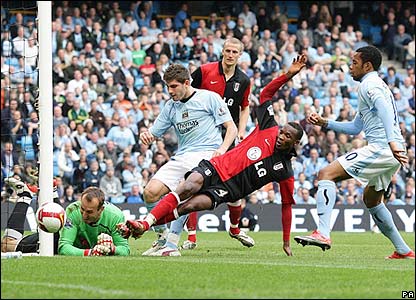 Javier Garrido, only one not to do anything wrong.

My Villain of the Match goes to >>>

Valeri Bojinov for being awful, Pablo Zabaleta (for ‘that’ pass), Nigel de Jong (for that ‘hoof’ to Ethuhu) and Richard Dunne (for ‘that’ absymally timed slide tackle/interception which didn’t come off and led to the third goal).

NO PASSION, NO FIGHT.

WILL WE PROGRESS AGAINST HAMBURG? NOT A CHANCE…