Manchester City were eyeing a repeat of the performance against FC Schalke in the UEFA Cup to try and progress in the UEFA Cup, no doubt against Bremen. However despite the constant battle, City were knocked out having only won 2-1.

Last time around Ireland was left disconsolate having scored after 30 seconds and seeing his side lose 3-1. 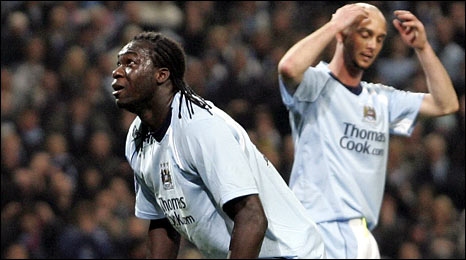 Shay Given (GK) – Shay didn’t put a foot wrong all game which we have grown accustomed to. He made one absolutely stunning save late on in the game from Petric which would have put us to bed. His instincts are phenomenal and his communication was much imporved, especially once skipper had departed. Apart from a couple of incidents during the game, he wasn’t really tested, but as we all know he still shows himself as a safe pair of hands. Had he been at the club a little while long, I have no doubt he would be up for Player of the Season. Kept us in the tie in the first leg and did his best last night. Not at faul for the goal, but my only complaint is that he never expects a shot to come in so is sometimes caught unaware and that was also shown with a backpass which the tireless Olic chased down and almost got rewarded for! Other than that…solid game.  7.5

Micah Richards (RB) – Having been singled out in the first leg of this game, Richards really needed to come out fighting. He again was picked upon, in particular the first 15 minutes. He looked very shaky during this time period and didn’t look up to scratch. This extra muscle he has put on has slowed him down considerably. He came to life in the second period and didn’t half bomb it up the line to support the magnificent Elano, but he doesn’t half trot back without a care in the world?  I’m usually a supporter of Micah but he was poor tonight and let the side down over the two-legged game, namely for the penalty and the lack of tracking back in the first leg. He created numerous chances and should have scored one late on, and done better in the first half when he fell over in the box with no man in sight. His passion did shine through though, playing up front whilst injured and offering a different approach to the game. However I have figured out the problem though, so Micah if you’re reading this then please read carefully. YOUR CENTRE OF GRAVITY IS ALL OVER THE PLACE AND YOUR TOUCH IS WORSE THAN A RAPISTS? **Rant over** Had it not been for the cover of Onouha, they could have had more. The Petric chance coming directly after Richards had given up on the ball springs to mind. He looked weary, weak and wounded. 5.5

Richard Dunne (CB) –  Tortured last time around at Hamburg and also tormented at home against Fulham, Dunne needed to screw his head on and communicate with his fellow players, as well as rasing team morale. Some may say he was poor but actually despite being sent off I thought he had a decent game by his recent standards. I thought he made numerous advantageous interceptions throughout the game. His sending off didn’t help our cause at all, but it was just the fact that Olic never stopped working and his trickery bamboozled Dunne into some rash decisions which ultimately may have cost us the game. Communication was again much improved and I was pleased with him on that front but one irrational decision too many Dunne i’m afraid. You overcompensated too much Richard. 5.5 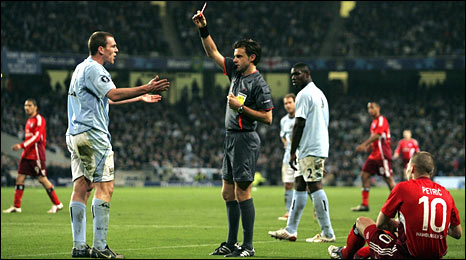 Nedum Onouha (CB) – Was a weak link in the team last time around but did his duty fairly effectively last night. Did well at the heart of the City defense, especially in dealing with areial threats and through-balls. Faded slightly towards the end of the game but cannot be faulted for his committment to the fighting team.
7.5

Wayne Bridge (LB) – Having been taken injured in the last three games (Arsenal, Hamburg and Fulham) surely Wayne had had enough time to recover and judging by his performance…he did. I was amazed that I ahd looked at the clock, and with 30 minutes gone…Wayne was still on the pitch and running! Unbelievable! My only concern is his servere lack of a right foot, I always became anxious when he was being pressured and hurried, especially when they were messing about with it around the back four. However apart from that I think he had a good solid game. His running was good throughout the game (which it should have been having had a break!) and his tackles were executed to a sufficient standard worthy of my praise! Played some lovely balls into the box late on in the game and his spirit shone. 6.5

Pablo Zabaleta (CM) –  An outstanding shift from the Argentine. Some good early distribution complemented Kompany’s dominance of the midfield. He worked incredibly hard and this showed as he left the field with a dead leg to be replaced by Gelson. I think he worked the most out of all the team and his tackling was fiesty yet controlled, his passing was sublime and his odd shot was good enough to force a save. My new favourite player along with ‘my hero’ and anyone at the game will understand why. He has got to be captain next season, he was superb. Gave 110% and again his passion to fight for the cause shone through. The person who replaced him had a big gap to fill…unfortunately for us this was Fernandes. 9

Stephen Ireland (CM) –  Having accused the team as not being brave enough in the first leg, he really had to give a BIG performance against a strong, physical Hamburg midfield. Another fading performance from the young Irishman. Lost his temper near the end of the game, which resulted in some clumsy play and he was fairly quiet compared to usual. Although I do admit, every time we got into their box, it always had something to do with Superman. His eye for a killer pass is breathtaking and those pin-point 40 yard balls are just crazy. Good work out for him but I would have liked him to get more involved in proceedings. 7

Vincent Kompany (CM) – A fantastic comeback game from Vinnie. He took no pity on his old team and fought well for the cause, much like Sir Winston Churchill did in WWII. A very brave performance, especially with a toe which he cannot feel! Got forward well and defended as valiently as a tank. Super effort and this should be commended. He was not here, there and everywhere but the job he did in slowing play down and speeding it up to the tempo City wanted was great. 9

Elano (RM) – Sent Robinho through numerous times and he looked back to his best. Hit the woodwork twice from set pieces which would have gone in on another day and his corners also caused havoc in their box. Scoring from the penalty spot gave the Blues some much needed momentum but sooner or later a keeper is going to dive top/middle left and save it with ease! His effort cannot be faulted and I was disappointed to see him go off late on in the game, but no doubt that was due to fatigue and lack of playing time. Should be one of the first on the team sheet against WBA. His passing was better than Ireland’s dare I say it! 9 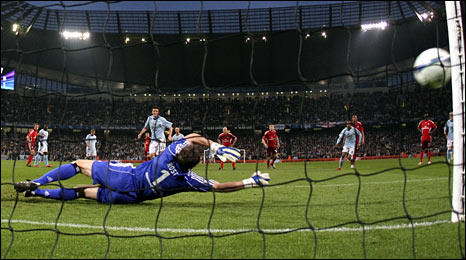 Robinho (LM) – Found himself space a good few times, and had some good dribbling spells. Perhaps unlucky not to have picked up a goal, especially when through on goal, but it was a tought chance to take down and get a powerful shot away, especially as Robbie had no idea what power is!? Had heavy legs by the end of the game and he put in a good shift for the team, always making sure the keeper didn’t time waste and always helping Bridgey on the left. More of that please Robbie. 6.5/7

Felipe *IM A F!?*ING DONKEY* Caicedo (ST) – Good and bad, but let’s not lie, mostly bad. Caught offside a collection of times, 9 I think I counted, but no doubt I blinked and missed a few? he’s so slow how could he be caught offisde? Looked cold for long spells (88/90 mins), but took his goal weel I must admit, feeling no pressure. Having put the ball over the bar from two yards out and ‘passing’ it to the keeper in the first half I was very disappointed and dismayed. Felipe couldn’t score in a brothel as far as I’m concerned, but that’s mainly due to the fact his legs wouldn’t fit through the door to start off with. Should sell him, he certainly shouldn’t be playing ahead of Sturridge or Ched. Shame we didn’t have Bellamy who I feel would have created more and scored more. 4 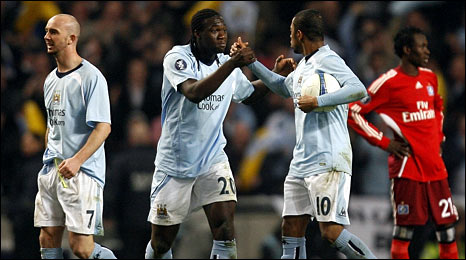 Referee (Some European joker) – Okay, stopped play too often and was let down enormously by his officials. ” little common sense to go with adherence to rules” 4.5

Manager (Mark Hughes) – Got his team going well and had some fantastic support from the fans. More performances like that and we will end up in the EUROPA CUP without a doubt next season. Hughes must be doing his nut that the players don’t turn in that type of performance more often though. 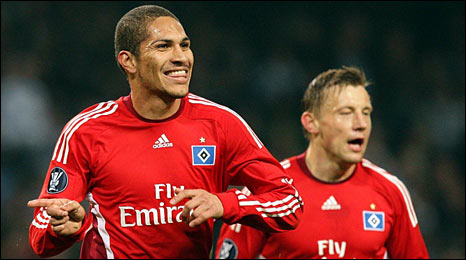 Gelson Fernandes (CM) –  Did not have the same impact as the player he replaced.
Danny Sturridge (ST) – Often thinks he can do it all on his own…has a lot to learn, not worth £40,000 a week, but then again neither is Danny Mills. 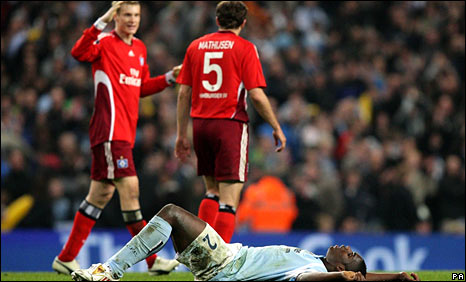 Felipe Caicedo (for THOSE offsides), Micah Richards (for not tracking back) and Richard Dunne (for that daft challenge), oh and the Germans in the box behind me who were not happy when I cheered in their faces! 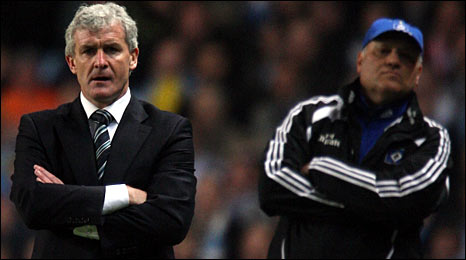