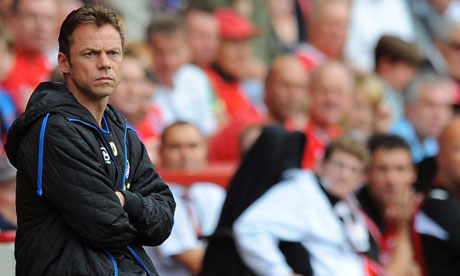 “Bouncebackability”. Some question if it is even a proper word.But while scholars may be querying  it across the country it seems a phrase that the world of football has claimed as their own. And Athletic seem to be using it as the blueprint of the season.

After what has been an eventful and exciting season thus far, in which fans at Oldham have been re-enthused by a dynamic new regime, it seemed that the wheels could potentially start to fall off. Following the disappointing derby day defeat to Rochdale and a meek surrender at Victoria Park, the 6-0 drubbing by Nigel Adkins’ resurgent Southampton had some fans questioning just how far the team could go. Oh ye of little faith.

After two straight wins against Plymouth and Brentford respectively, Oldham are back into play-off contention and looking to give the divisions big dogs a run for their considerable money. With fans beginning to believe that the promotion could finally become a reality, manager Paul Dickov was in predictably pragmatic mood, praising the performance against Brentford but also chastising the disappointing nature of the goal Latics conceded.

The game itself was docile at best until in-form front-man Oumare Tounkara clinically slotted home to give Latics a half-time lead they deserved. The second half continued in a similar vein, with the Blues always looking the more dangerous but it took the introduction of  the lively winger Filipe Morais before  Athletic doubled their lead and for Morais to grab his first goal for the club in the process, something the former Chelsea man was delighted about “It felt good to score because I have been frustrated with my lack of goals since I have been here.”.A late strike for Brentford’s Robbie Simpson gave Latics a scare but they held on, taking the side up to 8th in Npower League One.

It’s on to relegation-threatened Walsall now for Dickov’s men, in a match that Athletic will have serious intentions of winning but will not be easy. A third straight win would represent real progress for Latics and could bring about a play-off place. Bouncebackability seems secure in Oldham’s dictionary; consistency is still yet to be added.