Nigeria All Set For Egypt Task

Nigeria is all set to kick off the Group C fixtures, with a predominately tough match against Egypt tomorrow. On Nigeria’s behalf it will be a relief to get this Egypt match over and done with, as they then face the easier opponents in Group C which are Benin and Mozambique.

Nigeria
On paper Nigeria should easily qualify from this group, however Shaibu Amodu team have been really unconvincing over the qualifying rounds. They were put to the test against Mozambique in the CAF Round Three, and as I have said above, the Super Eagles will take on Mozambique again on January the 20th.

Nigeria has a very good depth of attacking players in their squad, for the 2010 African Cup of Nations. Kalu Uche and Nwankwo Kanu will provide the attacking flare down the wings for the Super Eagles; however Amodu could well face a selection headache, on which he should pick as his two centre forwards for the Egypt game. Youngster Victor Obinna had a smashing 2009 for his Country, as he proved to be a goalscoring maestro. Yakubu and Obafemi Martins are also in the squad; however Martins will probably not feature because of an injury sustained while playing for Wolfsburg. Peter Odemwingie is a very good option for Shaibu Amodu; however is he the answer to Nigeria goalscoring touch.

Egypt is one of the stern favourites for this competition, so Nigeria’s defence has to be on outstanding form, if they want to stop the Pharaohs from scoring. However yet again Amodu defensive selection could well be powered into question, as a very inexperienced defence could well crack under pressure from the Egypt attack. Everton defender Joseph Yobo is the most experienced defender in the team, however how will the likes of Yusuf Mohamed, Uwa Elderson Echiejile and Onyekachi Apam cope with the Egypt, Benin and Mozambique forwards?

Key Man – John Obi Mikel
If Nigeria want to break down the Egypt midfield, John Obi Mikel has to be on top form for the Super Eagles. As Mikel shows when playing for Chelsea, he sometimes sits in front of the back four, as people like to call it a Defensive Midfield role. Mikel is still only 22 years of age, and he has to perform to his personal best. Mikel will most likely have help from Seyi Olofinjana and Sani Kaita. However I feel Mikel is the man who can stop Egypt from scoring. 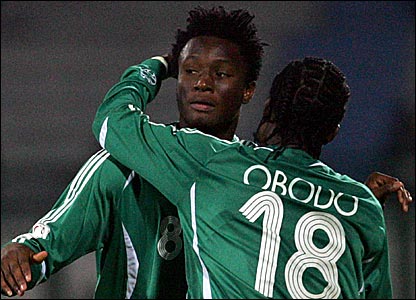 A bit about Egypt
Egypt are the kings of the African Cup of Nations, however this years tournament could well prove to be one of the toughest tasks Egypt will face over this decade. With the likes of Amr Zaki and Mohamed Aboutrika missing from the squad, Egypt will have to soldier on without them. On the other hand Nigeria will still have to cope with Mohamed Zidan, as the Borussia Dortmund striker has to be on goalscoring form, that’s if Egypt want to win this trophy for a 7th time.