Back from two down (again) – Peterborough 5 – 2 Oldham

Just like Huddersfield a fortnight ago, Posh continued their habit of giving the opposition a head start as visitors Oldham threw away a two goal advantage to leave London Road with nothing while The Posh pull off another stunning comeback.

Having missed out on a starting place away at Tranmere last week due to international duty with Northern Ireland, Grant McCann replaced Charlie Lee in the heart of the midfield to partner James Wesolowski. Lee Tomlin was named in the starting eleven for the very first time down the right wing as Gary Johnson’s men looked to bounce back from the disappointing result at Tranmere last week.

Oldham boss Paul Dickov has made an impressive start to his management career and he made three changes to his team that faced Peterborough. Centre-back Reuben Hazell, midfielder Ritchie Jones and striker Warren Feeney all returned to The Latics starting eleven as Jean Yves M’voto, Rodrigue Dikaba and Dean Kelly all dropped to the bench.

The Posh can boast the best second half form in the division, however, unfortunately, The Posh also have the worst first half form in the division. Therefore it was no surprise that the visitors took the initiative and had the first opportunity of the game, after just two minutes. Good work by Warren Feeney down the right hand side created a good chance for Chris Taylor, arguably Oldham’s best player, but he could only fire just over the bar from 20 yards. Feeney then had an effort on goal himself, but his shot fired wide of Joe Lewis’s goal.

Boro were failing to make an impression on the early stages of the match, but some impressive defending from Paul Black, after some need play from George Boyd, managed to put off Aaron Mclean and Dean Brill in the Latics goal could easily snuff out any danger.

Oldham continued to dictate proceedings after this and there was no astonishment when they took the lead on 20 minutes. Black produced an inch perfect cross which met RITCHIE JONES at the far side of the penalty area who sent a looping header past Lewis and in off the far upright. There may have been an element of luck in the finish, but the lead was thoroughly deserved for the Latics. 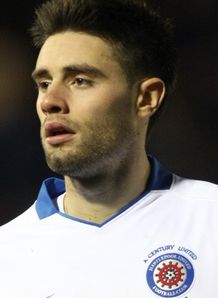 Going behind clearly was the kick up the backside the Posh team needed as they started to move the ball about with a bit more purpose, McCann and Wesolowski in particular being the most influential. Chris Whelpdale, in his unfamiliar right back position, saw a shot blocked before a driving run and snap-shot from Lee Tomlin was parried from Dean Brill before Craig Mackail-Smith could pounce.

Oumare Tounkara was proving to be a menace for the away team with his direct and mazy running; he came close on 29 minutes but fired into the side netting. Brill was called into action moments later as a smart ball by Lee Tomlin set up Aaron McLean, but he saw his effort pushed away by the former Luton shot stopper.

After some dreadful defending again by the Posh, the Latics doubled their advantage. Oldham full-back Kieran Lee took advantage of the time given to him by the Posh defence to deliver a fine ball for CHRIS TAYLOR to nod home, beyond the reach of Joe Lewis.

With hope and confidence quickly draining from the Peterborough side, they would now have the mammoth task of replicating the performance of two weeks ago against Huddersfield. However, the Posh fight back began just moments before the end of the first half as Tommy Rowe, who was having a splendid game at left back, delivered an inch perfect ball onto the head of JAMES WESOLOWSKI who nodded past Dean Brill to halve the deficit. 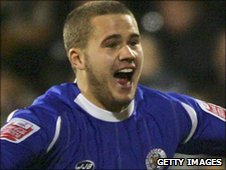 Weso pulled one back for the hosts

There was still time for Tomlin to try to level the scores but his speculative effort whistled over the bar. In truth, Wesolowski’s goal just before the interval most likely saved the Posh players from a rollicking from Posh chief Gary Johnson who had just witnessed a below par Posh performance. He should have probably expected it though.

One change was forced upon the home side as Gabby Zakuani replaced the injured Ryan Bennett at half time in defence.

The Posh returned from the interval all guns blazing as Boyd shot wide of the target after some neat work from former Rushden man Lee Tomlin down the right hand side. Paul Dickov’s men responded by firing a Dale Stephens free kick just over the cross bar, with the Oldham payers claiming Lewis had got a touch. If Lewis did make the save, it certainly was a match winning standard save.

It was certainly the home side who started the more encouraging as Whelpdale went on a run down the right side and cut inside, only to see his tame left footed effort role into the arms of Brill. The match then erupted into a scene of ugliness as Jones reacted angrily to a Tomlin challenge. After a melee and three yellow cards later (for Jones, Mclean and Tomlin) the game was allowed to continue. Directly from the resulting Chris Whelpdale throw AARON MCLEAN rose the highest and neatly headed the ball into the bottom corner to even up the scores.

Mclean is among the top goalscorers in League 1

With the game developing into a hot tempered, feisty encounter, the pressure was all in the Posh’s favour despite the best efforts of the Oldham players, in particular Kieran Lee, to break up the flow of the game by diving and time wasting. The behaviour of the visiting players clearly reflected the playing style of manager Paul Dickov.

On 71 minutes, the Posh took the lead for the first time in the match after some sloppy defending from the Latics. Ironically Kieran Lee, who had plenty of abuse from the Posh fans directed at him, was the culprit. It was the former Manchester United trainee who dallied in possession, only to be faced by George Boyd who robbed him of the ball and fired a typical GEORGE BOYD left footed drive into the bottom right hand corner of the goal which the Posh fans have witnessed so many times in the past.

Boyd put posh in the lead

The Posh faithful were in full voice as the team had certainly improved on the first half display. Aaron Mclean, who had been yellow carded, was replaced by Dave Hibbert on 80 minutes. Amazingly, only two minutes later with practically his first touch he had doubled the advantage for Boro. A McCann corner (conceded by Kieran Lee) was (again) inch perfect and it was met with the diving head of DAVE HIBBERT who made no mistake, scoring his first ever Posh goal.

The remaining 15 minutes petered out as Peterborough looked dominant in possession, Oldham looking like they were out of ideas and the win looking almost certain. The only Oldham chance of any significance in the second half fell to Feeney, but the Northern Ireland international had his effort pushed round the post by Lewis, despite a fumble from the former under 21 ‘keeper.

With the game looking as good as over, the magical George Boyd was bundled over in the box. Skipper GRANT MCCANN stepped up and confidently slotted the ball into the bottom left hand corner in the 96th minute to cap a very convincing second half performance, and to inflict the first defeat for Oldham boss Paul Dickov.

It is needless to say Gary Johnson will be delighted with the performance of his players in the second period (again) but the man is no fool and will be keen to eradicate the first half problems. Whether this is a psychological thing or not, we need to prevent the habit of giving the opposition a head start in matches, otherwise, I can’t see how we can sustain the pace at the top of the table.