Anthony Stokes was born in Dublin in 1988. He always had a love for football and he dreamed of playing for Celtic. As a young boy in Dublin he played for Shelbourne and Cherry Orchard youth teams. He was then signed by Arsenal and broke into the reserves at the age of fifteen.  He made his first team debut for Arsenal on 25 October 2005, coming on in the 88th minute in a 3-0 league cup win. He then trained with Sunderland and wanted to go on loan to the Black Cats but Niall Quinn decided against it because of the size of his squad. After Sunderland decided against a loan deal for the Irishman it was Falkirk who got him, they got him on loan until the end of 2006. This is where he made a real name for himself. He scored the first hat trick of his career in a 5-1 win over Dundee United on the 28th October, a week later he scored his second second hat trick in a row against Dunfermline. This made him the first player to score consecutive hat tricks in the Scottish Premier League. Ironically, he scored a last minute goal against Celtic in the Scottish cup. The match went into penalties and Falkirk went on to win 5-3. Anthony Stokes’ last game for Falkirk was on 30th December 2005, he scored a hat trick and Falkirk went on to win 3-1. He was a huge success in the SPL and scored sixteen goals in eighteen appearances.

After returning to Arsenal after the loan deal at Falkirk Stokes caught the attention of a few Premier League teams, but it was Sunderland who decided that they wanted him and their £2 million offer was accepted by Arsenal in January 2007, and that was it, Stokes was officially a Sunderland player. At first Stokes was given the number 26 shirt but was later given the number 9 shirt. He made his debut for Sunderland against Ipswich and set up Sunderland’s goal in a 1-0 win over Ipswich. Stokes scored his first goal for Sunderland against Plymouth Argyle on the 10th of February. His first Premier League goal was in a win against Derby County, a last minute goal which took Sunderland out of the Relegation zone. After a while, Stokes was loaned out to Sheffield United. This loan spell was not as successful as his first with Falkirk as he made twelve appearances but failed to score a goal. After Returning to Sunderland he was sent out on another loan to Crystal Palace. Once again he failed to score on this loan after making thirteen appearances. Sunderland then decided that they would sell Stokes to Scottish side Hibernian for a fee of about 500,000 in August 2009. Stokes would be re-united with his former Falkirk manager John Hughes at Hibernian. He scored his first goals for Hibernian against St. Johnstone on 19th September. He then helped Hibernian to a twelve match unbeaten run by scoring five goals in three games. Stokes broke another Scottish football record when he scored the fastest goal in Scottish Football after just 12.4 seconds against Rangers. Stokes was rewarded for his good form with the Scottish player of the month award for December 2009. The Irishman scored the goal of the season in 2009. It was then that Celtic manager Neil Lennon declared his interest in Stokes and after Hibs turned down a first offer they accepted the second offer a few days later.

On 31st August 2010 Anthony signed a four year contract with Glasgow Giants Celtic. Stokes made his debut against Hearts and scored his first goal for Celtic in his second appearance on 19th September. Since joining Celtic Stokes has become a fans favourite. He shared Celtic’s top scorer award with strike partner Gary Hooper at the end of last season having both scored 19 goals. Stokes continues to score and in recent months has really given Giovanni Trapattoni something to think about regarding the coming European Championships in Poland and Ukraine this Summer. 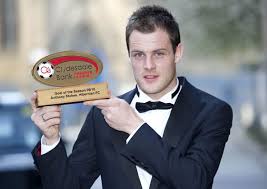 Left: Stokes wins player of the month during his time at Hibernian.

Left: Anthony Stokes when he was an Arsenal player.

What a two months!
Celtic 3-0 Dunfermline