Stoke have been handed a favourable draw for the quarter finals of the League Cup, being paired at home with Paul Jewell’s Championship side Derby County.

Founded in 1884, the Rams were founder members of the Football League alongside Stoke, and the club have spent large chunks of their history playing in the top flight, winning the title in 1971/72, the same year Stoke won the League Cup, and then again in 1974/75. Derby have never progressed beyong the semi-finals of the League cup, reaching that stage just once, in 1968.

The clubs last met at Derby’s Pride Park in February 2007, Stoke leaving with a 2-0 away victory. Derby went on to win promotion through the play-offs that year, before being relegated straight back to the Championship with the lowest ever points total, securing just eleven points and winning just one game. The Rams currently sit thirteenth in the Championship table after recovering well from a poor start.

This draw is about as good as we could have hoped for, playing one of the lower ranked teams left in the competition at home. This gives us a very good chance of progressing into the semi-finals and even makes going all the way look like a possibility. hopefully we will field a full strength side in this competition from now on this season, to maximise our chances of getting as far as possible in the competition that will surely provide our best chance of winning silverware this season. 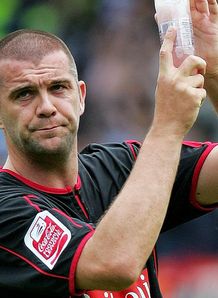 Danny Higginbotham and dominic Matteo were on the scoresheet when the sides last met almost two years ago.

The tie will be played on the week of December 1st.