It’s the start of another week of Premier League player profiles, as I and fellow blogger 5stars will be profiling a player from Everton and Wigan. As the title shows, today’s blog will be about on form Everton striker Louis Saha…

Louis Saha started his career with French side Metz, however while in his spell with Metz, Saha was loaned out to Premier League side Newcastle. Saha made eleven appearances for the Magpies, but he only managed to score one goal. Saha then attracted interest from Division 1 side Fulham and he decided to sign for the Cottagers in a deal worth £2.1 million. Saha was a massive hit with the Fulham fans, as his goals helped Fulham achieve promotion to the top flight of English Football. In the 2000-2001 season, Saha scored 27 goals for Fulham, that total proved to be the highest in League 1 therefore Louis Saha was able to finish as the League 1 top scorer that season.

In the year 2004 Saha signed for Manchester United, as manager Sir Alex Ferguson was impressed with his performance against the Red Devils earlier in the 2003/2004 campaign. Saha featured 86 times for Manchester United scoring 28 goals in the process, however while at United a number of injuries wrecked his Red Devils career. Louis Saha joined fellow Premier League side Everton in the year 2008, this season though the Frenchman is currently one of the inform players throughout the whole of the Premier League.

This season Saha has been a huge hit with the Everton fans, as the striker has been able to keep himself fit for most of this 09/10 Premier League season. Saha has scored 13 goals in the Premier League, most of which have been scored by his clinical left foot. Earlier in the 09/10 campaign, Saha was able to amass a total of seven goals in seven appearances throughout all competitions for Everton, classing him as one of the most feared strikers in the English Premier League. Saha also has saved his current club from humiliation this season, as Everton have had to contend with a number of injuries, the Toffees struggled to find form early in the season, however Louis Saha gained Everton some key points, as he popped up with some crucial goals for an injury struck Everton side.

Also this season Saha has caused problems for some of the Premier League’s best defenders, especially Chelsea centre back John Terry. As on two separate occasions this season, Saha has scored against Chelsea. On the 12th of December the Frenchman scored in the 3-3 draw against the Blues at Stamford Bridge. Last month in the returning fixture, Saha single handily won Everton the game, as he caused John Terry all sorts of problems, in Everton’s 2-1 win against Chelsea at Goodison Park. However this weekend the Toffees stunned Manchester United 3-1 at their beloved home ground of Goodison Park, but Louis Saha failed to score against his former club on Saturday, even though some of his attributes really paid off for him especially his strength.

Many pundits have taken notice of Louis Saha performances this season. As pundits have been amazed by his all round displays, as the likes of Paul Merson have touted him as one of the best Premier League strikers. Even some of them have said, that on his day, Louis Saha IS the best striker throughout the Premier League. Like Rooney and Drogba, Saha can hold the ball up, his pace can cause defence’s problems and he can score goals. The way Saha has been playing this season, those statements are pretty correct in my view.

Moving onto his international career, and for Saha he hasn’t featured very many times for his home country of France. The striker has been capped 18 times for his national side, plus he has also scored 4 goals for his country. On the other hand, Saha is on form and from my point of view he is definitely warranted another call-up from the France coach Raymond Domenech. Saha is currently in blistering form for Everton, and as the 2010 World Cup is approaching, the Everton striker is certainly making a statement. However with upcoming strikers on France’s ranks, Saha could well miss out, as the likes of Gignac and Gomis are likely to be picked ahead of Louis Saha. Overall Saha is currently one of the most feared strikers throughout the whole of the Premier League, and I for one believes Saha should be given another chance to shine in a France shirt. 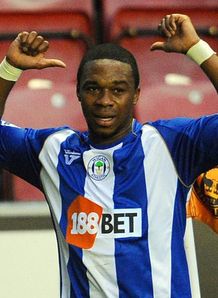 Sunshine or Shadow? Nani……it’s up to you
Premiership Player Profile – Charles N’Zogbia