Past and present; the Premier League stars that we most love to hate.

My mum once taught me, that not everybody is going to like you, no matter how hard you try. Thanks to the diversity of our World, my mum’s teaching rings true (but to be honest, it’s quite a good thing!). What makes me feel that little bit better however, when I have that sinking feeling that I’ll never make it as a top-flight footballer, is that thankfully my level of popularity will hopefully never plummet to the depths that some of these deep-sea divers have already achieved!

Every football fan has their little black book of players that they’d just love to be on the pitch against, go through the back of them with a disastrously timed two-footed challenge, prematurely ending their career, but luckily for yourself, miraculously escape a booking. To explain the reasons behind the actions of some of these notable footballers would require a separate blog, possibly an entire book, to itself. One thing is for sure though, the players on this list make the blood of most fans BOIL. Some of these players restrict their hate, whinging, diving, spitting, fighting, exclusively to the football pitch. The others however, the ones who really aim to get under our skin, go the extra mile to tarnish their reputation both on and off the field. The following list of “1o players that we most love to hate” is inevitably going to contain an element of subjectivity (I have an opinion too, you know!), but I’m sure that most of you can find identify with my choice of cheeky-chappies. This list is not intended to be a slur of any kind on their footballing ability, I’m actually a huge admirer of most, but I can’t deny it, sometimes they really do wind me up!

Good question Mario. Why is it always you?

Cruising in at the bottom of our list, it’s Manchester City’s golden boy Mario Balotelli. Despite residing in the UK for just under a year and a half, this cheeky-chappie has caused enough stir already with his questionable antics. Now I’m giving him the benefit of the doubt because he’s still very young, and according to the Metro he did a very noble deed over Christmas; driving around the streets of Manchester dressed as Father Christmas whilst handing out money. Nevertheless, this jack-in-the-box still knows how to push people’s buttons (most notable those of Jose Mourinho and Roberto Mancini). If he’s not taking a friendly match seriously by attempting audacious back heels, then he’s sitting on the bench using his I-pad. Off the field he’s been involved in a car crash, being rude to a Police Officer, throwing a dart at a team-mate, breaking curfews, and most worryingly of all, setting off fireworks in his own house. Can we endure another season of this boy’s extrovert personality?!

According to the Daily Mail in 2008, in terms of yellow cards received, Robbie Savage is the “dirtiest” player in Premier League history (although this has been surpassed by Lee Bowyer). If the endless amount of mistimed, dirty challenges isn’t enough to make you hate him! This guy also received a First from Cambridge for his acting skills, which he quickly transferred to the football pitch, often milking the results of a challenge in a melodramatic fashion worthy of an Oscar. What baffles me, (and ironically makes me dislike him even more), is that somehow he has forged a successful career now in the media. Unfortunately for Savage though, he’s only dented his reputation further by embarrassing himself on BBC’s Strictly Come Dancing, whilst highlighting on “Savage Says” his inability to string a sentence together without forgetting what he’s just said.

Not known for his sportsmanship.

I’m sure that many of you remember this moment, and ever since, his reputation just hasn’t been the same! A legend amongst Arsenal fans, a complete brute amongst others. Ironically, Ruud van Nistelrooy is still crying in the corner of his bedroom due to the trauma of that horrific penalty miss in the F.A.Cup, and more to the point, because of the sympathy that Keown showed. If you haven’t seen the video on YouTube of Keown during an interview getting hit on the back of the head from a stray ball during the warm-up of the Leeds players, then check it out now. The subsequent roar from the crowd only goes to show the unpopularity of this man! 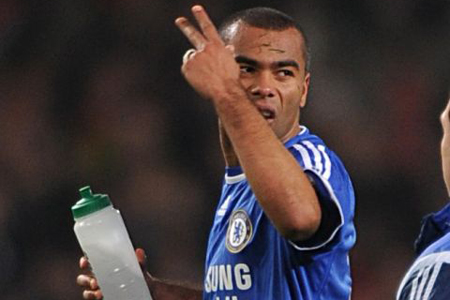 "Cashley" at his role model best.

He made an almost unforgivable mistake: He cheated on arguably the most beautiful woman in the World. If that’s not enough to tar your reputation for good, I don’t know what is. Cashley is the kind of guy it seems who likes to play away from home, making the taboo like switch from Arsenal to Chelsea only reiterates this. Like a few others, Cashley has had his scrapes with the police, accused of being involved in orgies, and worst of all, firing an air rifle at a student on work experience. How moronic and nasty can you get?! He may be one of the best defenders in the World, but boy, does he have a reputation.

Most people dislike Wayne because he’s “over-rated,” and that England rest their hopes too heavily upon him. That’s fair enough. More to the point though, Wayne’s reputation is tarnished for other notable things. A penchant for swearing at TV cameras in front of millions of young viewers, both for club and country; criticising English football fans after his own awful performance; allegations of an affair; numerous red cards; but worst of all, the butt of 90% of Frankie Boyle’s jokes on Mock the Week. He may be talented, but boy is he disliked. How this man has captained the English national football team, is beyond me. Charges of assault and affray in 2002, parking his car in a disabled bay, these are just the trivial matters in the long list of John Terry controversies. Allegations of an affair, most notably with a team mates ex-partner, no wonder that nobody trusts him. A “racist” according to Anton Ferdinand, it is a wonder that this man can be used as the beacon of English football. What makes you dislike him even more, is that he possesses the power to come back from the dead (remember the Arsenal game). It seems that we will never be rid of this man! Liverpool and City fans probably have most beef with this cheeky chappie, and to be honest, it’s no wonder. His unbelievably vocal passion for Manchester United, expressed most poignantly when winning, can only serve to drive most rival fans insane. Unluckily for everybody other than United supporters, he now works as a spokesperson for SkySports, meaning that he can spread his Manchester United propaganda even longer. 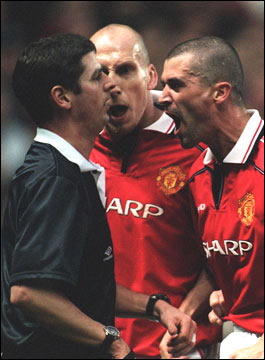 Never one to keep his opinion to himself.

Well, where do I honestly begin? The amount of scuffles Roy has been in on the pitch is uncountable; mostly involving Patrick Vieira. Nasty, vicious, this guy leaves no prisoners, including referees. Red cards were his forte. Bust ups came in a close second. A relationship now beyond repair with Sir Alex Ferguson, this man showed no sympathy for his native Ireland when they were denied a World Cup spot by Thierry Henry’s handball. Infamous for berating people who are interviewing him, a persistent grudge against Mick McCarthy, just ask Alf Linge Haaland what a brutal person Roy Keane can be. If you weren’t a United supporter, you hated him.

A bit rich coming from you El.

The decision to transfer this guy to Scotland to play in a high-tempo match like Rangers v Celtic was, simply put, a recipe for disaster. Diouf is known for being incapable of avoiding trouble, so to play in a match such as that, you’ve only got the managers to blame. A tendency to spit, not just at players, but at fans, he doesn’t care how old you are (11 year old fan at Middlesbrough), he’ll gob at you. He’s been arrested by police for being racially provocative towards a ball boy (how low can you get), whilst he taunted an injured Jamie Mackie at QPR (crying on the floor with a broken leg), he allegedly whispered to him “you sewer rat.” Not surprisingly, Diouf was involved with the Neil Lennon controversy across the border, and to this day, continues to terrorise society. 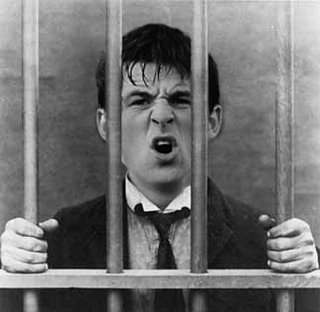 It really wouldn't surprise me.

Now the shame is here, is that Joey Barton is a top player, who arguably could play for a team like Arsenal. But, alas, his reputation overshadows his playing ability. It seems as if violence runs in the Barton family; what with his brother serving a life sentence for his involvement in a racially charged murder. Joey has had his own personal scrapes with the police, indeed he served a 77 day sentence for common assault and affray outside of MacDonalds (classy). He also received a four month suspended sentence for assaulting Manchester City team mate Ousmane Dabo (and the pictures looked pretty nasty). He likes to fight, that’s for sure, even on the pitch! Remember that cheeky punch on Morten Gamst Pedersen against Blackburn? Or most recently his involvement in that headbutt whilst playing for QPR? Another one of those ex-actors turned footballers, I’m sure that most of you can remember his theatrics against Arsenal when he got Gervinho sent off. It seems that there is no end to his trouble making. To top it all off, who remembers that horrible moustache that he grew last season? A player with few redeeming features, and rightly so, at the top of our list.