Swansea have had a terrific season this year currently sitting 4th in the league continuing the success that was brought to the club by previous manager Roberto Martinez. Martinez earned ‘The Swans’ a reputation as the best “passing football” club outside the Premiership and Paulo Sousa has managed to retain this image as both managers have brought a more continental style of football to the Liberty City Stadium. Swansea’s campaign has been particularly impressive due to the fact that Martinez took Jason Scotland and Jordi Gomez, two of the clubs top talents, with him to Wigan after his departure. ‘The Jacks’ have also shown consistency throughout the campaign, something that cannot be said for their fierce rivals Cardiff City, only losing 6 league games so far. This consistency was underlined by an 11 game, 2 month, unbeaten streak between September and November. If there is a criticism that comes with Sousa’s style of football it is that Swansea don’t score many goals, they are the Championship’s joint lowest scorers with Plymouth however a very solid defence makes up for this lack of ‘fire power’.

The Welsh club formed as Swansea Town in 1912 and joined the second division of the Southern League. Swansea were promoted to the Southern League first division following the Second divisions collapse after the Second World War and became founder members of the Third Division in the English Football League. They also had a memorable cup run in 1964 reaching the semi-final of the F.A Cup despite not being in the top division. ‘The Swans’ enjoyed their most successful period in the 1980’s under John Toshack gaining promotion the top tier of English football in 1981. In their first season in Division One they made a title challenge topping the table for periods in the season, they also had memorable wins against Manchester United and Arsenal in this campaign. After this unbelievable debut season in Division One the club slumped to two consecutive relegations and were very close to being ‘wound-up’ in 1985. In 1986 the club were back into the basement division of English football, Division Four.  In recent times things became less turbulent for the Welsh club however and they marked their return to the Championship following a promotion from League 1 in the 2007/2008 season, winning the league with a total of 92 points.

Swansea are currently unbeaten in 7 League games and have conceded just 5 goals in 2010 so far. They have only lost two games at home this season but have drawn 7 due to the lack of goals the club score; they are the second lowest home scorers with only 14 goals being able to be celebrated by the Swansea faithful. They have however only conceded 9 goals at the Liberty Stadium and only Newcastle have conceded fewer home goals.

Peterborough have seen an up-turn in recent results under Gannon picking up 6 points in their last 4 games but are still awaiting a win away from home and have only picked up 4 points on their travels all season giving them the worst away record in the league. ‘The Posh’ have also only scored 9 goals away from London Road, the lowest in the Championship, they have also leaked a massive 28 goals away from their home ground.

In an amazing game at London Road the two teams fought out a 2-2 draw. Chris Whelpdale volleyed the hosts into the lead following an Exodus Geoghagan throw-in but it wasn’t until the 84th minute until the drama really started. Lee Trundle thought he had earned ‘The Swans’ a valuable point after he was allowed the run across the Peterborough United penalty area and finish expertly but he couldn’t believe his luck when he put ‘The Swans’ into the lead two minutes into added time with another expert finish. The goal scoring still hadn’t stopped though after some poor defending from Swansea Aaron McLean was allowed to poke the ball home into an empty net to snatch a dramatic point for Posh. 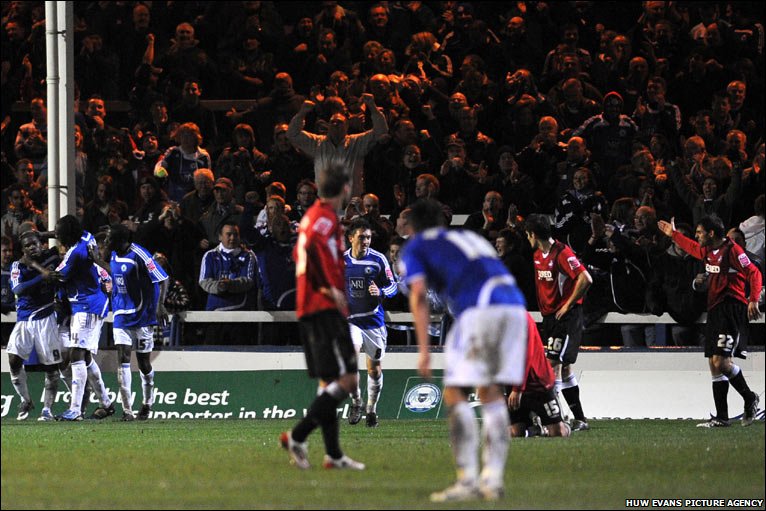 Swansea: Nathan Dyer – The lightening fast winger signed for Swansea after a successful loan spell from Southampton towards the back end of the 2008-2009 season. He has scored three times in a Swansea shirt and is the clubs top assist maker this season with 4. Posh will have to keep the pacey winger at bay as he has the ability to get expose any weakness in the Peterborough United back-line.

Peterborough: Craig Morgan- The Welsh centre back returns to his country of birth to play on Saturday. After a turbulent start to this season many Posh fans thought he wasn’t cut out to make it at this level but he has improved his performances drastically of late and is now beginning to show the form that makes him a regular starter for the Welsh national side. He is likely to have to fend off a lot of pressure from the home side and will have to be the top of his game to keep the hosts at bay.

Swansea: Gorka Pintado is suspended after his horror tackle on Robbie Savage last weekend. Andrea Orlandi is out through injury. Cedric Van Der Gunn and Craig Beattie may have recovered from injuries to be fit to play against ‘The Posh’.

Peterborough: Influential George Boyd is a doubt after a catching a virus.  Josh Simpson has recovered from a knock he picked up and Gabriel Zakuani may make his return to the Posh first team in some shape after coming through 60 minutes for the reserves following a groin injury which has plagued him for much of the campaign so far.