The Only Way QPR Can Survive

The financial resources and the enviable squad depth the club has is definitely rare in relegation battlers. They even have Harry the sorcerer who almost single-handedly rescued Portsmouth from relegation to Cup finalist and recently reinvigorated Spurs as the best of London. However the ego and mentality of their players are perhaps the only obstacle in their relegation battle and it’s too much for Harry Redknapp to take this time. 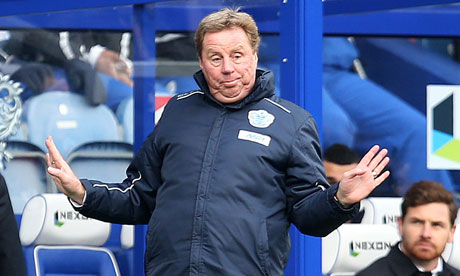 Esteban Granero left star-studded Madrid to join QPR, not only because he wants first team football but also command.  A good passer of the ball, he no doubt has the attributes to be the metronome of a team like QPR. Yet with more than 2/3 of the season gone, he has yet to settle in the league. The biggest reason is, and apparent, when league leader Manchester United visited Loftus Park this weekend. Granero obviously has a problem playing with another egoistic teammate – Taarabt.

Adel Taarabt, an outcast at Spurs when Redknapp was in charge, reunites with his former manager and has become an indispensible part of the team. Nonetheless the Moroccan talent has to understand that football is always a team sport even if you are as good as Cristiano Ronaldo or Messi. His confidence is admired but he has to have confidence in his teammates too. He has to let the former Madrid man to dictate tempo and to let Zamora or Remy or other strikers to finish off attacks.

Andros Townsend, playing consistently since Redknapp signed him on loan, showed good signs of talent but his eagerness to prove himself and similar over-confidence as Taarabt often resulted in making the wrong decisions at the wrong time and, to be frank and honest, he is not a match-winner yet worthy of starting games which captain Samba suggests to play as cup finals.

While young players and big team imports are risking the club’s fortune – albeit unintentionally – to make a name for themselves, established players are also finding it difficult to at least act motivated on the pitch.

Jose Bosingwa, arriving as a Champions League winner, would expect himself to walk straight into the team but his performance on the pitch was not worth a starting berth, and definitely not his rumoured 100k salary. His first return from being frozen out against Man United was abysmal compared to his best days; he looked, as ever since in a QPR shirt, passionless.

Other new signings last season such as Junior Hoilett, Park Ji-Sung and Diakite have survived the exile under Redknapp but are only fringe players at the moment. They are yet to prove their intentions of landing at Loftus Road are not for the paycheque. If they still could not start challenging for a place in the starting lineup and contribute to the relegation battle, it is hard to not believe in rumours of a safety net included in their contracts – relegation release clause.

Looking back at when Portsmouth survived relegation, Redknapp assembled a team of experienced and humble individuals. David James, Sol Campbell, Sylvain Distin, Niko Kranjcar, Kano, Benjani etc., they played and fought like a team, which is always the most crucial factor against relegation. Now Harry Redknapp has players of exceptional quality which Roberto Martinez did not at Wigan last year, but the tougher characters of the Latics players, as well as the “moneyball” effect makes Harry’s task more improbable than ever. Now Harry would wish he went to Hogwarts.