An entertaining affair at Craven Cottage today ended in a stalemate, despite the best efforts of both sides to force a victory. City scored early on, after a glorious move down the right saw Pablo Zabaleta’s cross headed in by Benjani, but Jimmy Bullard got the equaliser midway through the first-half.

City boss Mark Hughes was forced to field a much-weakened side after a spate of injuries and flu ruled out a number of first-team regulars. Micah Ricahrds, Javier Garrido, Elano, Michael Johnson, Gelson Fernandes, Kelvin Etuhu, Robinho, Martin Petrov and Valeri Bojinov all missed the game and this left Hughes with no choice but to play players who would not usually be considered first-teamers. Richards’ injury handed another opportunity to Israeli international Tal Ben-Haim, who is looking to impress Hughes as the January transfer window approaches. Full-back Michael Ball replaced the injured Javier Garrido, and even he was only half-fit, having not trained all week due to flu. Dietmar Hamann and Vincent Kompany played together again in the centre of midfield as Hughes sought to add greater solidity away from home. Benjani replaced misfiring striker Jo, and Shaun Wright-Phillips was deemed fit enough to play after his kicking at the hands of Man United.

The visitors began the game much stronger, and it took only five minutes for the Blues, playing in their red and black away kit, to score the opening goal. Neat work down the right flank between Wright-Phillips and Argentinean Zabaleta created space for the full-back to swing over a delightful cross, straight onto the head of Benjani, who promptly dispatched the header. It was the striker first Premier League goal of an injury-hit season and was followed by his customary finger pointing celebration. 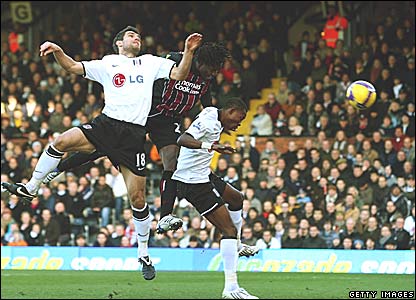 City created another few chances in the first-half, but as the break approached, it was Fulham who looked the more likely to score a goal. So it came as no surprise when midfielder Jimmy Bullard equalised for the home side after a pass from Bobby Zamora. Bullard rifled the ball across Joe Hart in the City net who remained motionless due to the power of the shot. The home side should also have been awarded a penalty after Andy Johnson’s flick seemed to strike City defender Richard Dunne’s hand just inside the box.

Half-time came and went, and as the second period began it was City who started brightly. Pablo Zabaleta was getting forward at every opportunity and he was causing all sorts of problems for the Fulham defence. He saw one shot tipped agonisingly round the post and hit another drive straight at Mark Schwarzer in the Fulham goal. 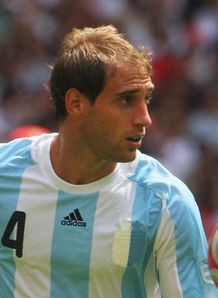 Both sides wanted the win, but despite an exciting finish, neither team had the extra quality to break down the opposition, and referee Rob Styles blew his whistle to signal th end of the game with score at 1 – 1.

Hart – Dealt with most attacks, although could possibly have done better for the goal – 6

Zabaleta – Fantastic. Got forward on numerous occasions and looked solid in defence – 8

Ball – Late replacement for Garrido and won’t be making too many more performances after this. Struggled throughout and offered little attacking threat – 5

Hamann – Had a lot of the ball and kept passing fairly simple. Managed to get through whole 90 minutes which was impressive!! – 6

Kompany – As said previously, had one of his worst games for the club. Weak in tackle – 5

Vassell – Much better than previous games which wasn’t hard!! Prefers playing away from home when he doesn’t have crowd on his back. Brought energy and hard work to the side – 7

Wright-Phillips – One of City’s best players. controlled game in first half an hour in unusual central role – 8

Benjani – Worked very hard and goal was just reward. At the moment, is a better option than Jo – 7

Evans – Another one who was under the weather with the flu, but came on for last fifteen minutes. Didn’t do anything – 6

Men of the Match – Pablo Zabaleta and Shaun Wright-Phillips