Danko Lazovic’s 10th International goal for Serbia was enough for Beli Orlovi to see off the stubborn challenge of Nigel Worthington’s developing Northern Irish side at Windsor Park. Lazovic of PSV, capped off a fluent move at the edge of the box involving Zdravko Kuzmanovic and Zoran Tosic set up the 26 year-old PSV frontman to drill his shot past Maik Taylor, who pulled off a few superb saves during the match, in particular, a stunning acrobatic stop from Kuzmanovic early on in the game after the Stuttgart midfielder’s shot was curling quickly for the top corner.

Northern Ireland had a couple of decent chances, nothing major to trouble Stojkovic in the Serbian goal, but David Healy had a great chance on 64 minutes and didn’t trouble the keeper. Motherwell’s Stephen Craigan had two strong headers well blocked from Stojkovic and the stubborn Serbian backline in both halves. Jonny Evans was taken off at half-time for Northern Ireland which provides Sir Alex Ferguson another injury problem ahead of a busy period at Old Trafford.

This was the first of a double-header for Radomir Antic’s side, who play their next friendly in South Korea on Wednesday. Its fair to say, Korea will give the highly-rated Serbs a more competitive test having themselves qualified for the World Cup in South Africa. The 20th best side in the world, according to FIFA Rankings, have developed rapidly over the last few years and in my opinion are one of the most exciting national teams to watch at this minute. They have a manager and an FA, focused on combining their one or two top class, experienced players with an influx of homegrown talent. As a Scotsman, who’s national side was embarrasingly torn apart by another average International side, I admire Serbia’s strategy and ambition to give the young players a chance to lead their national side forward, something I wish the Scottish FA would look at immediatley. Antic, who has now been in charge for 16 games, losing only 4, is well-ahead of schedule having deservedly pipped France to an automatic place in South Africa.

Well, you may laugh, and laugh all you like, but I genuinley believe the Serbians can do something special at this World Cup. Having only lost 2 games in Qualification and gaining 22 points from 10 games is a fantastic record for any side, they only conceded 8 goals in the 10 games which shows they are pretty hard to break down at the back. Lets take a good close look at what ammunition Radomir Antic will have at his disposal ahead of the show-piece event. Between the sticks, Vladimir Stojkovic of Sporting CP, has 26 caps and is a reliable and steady goalkeeper who isn’t prone to many major blunders. Having a reliable keeper, breeds confidence among the rest of the team.

In defence, the main colossus is Manchester United’s Nemanja Vidic who is a born leader of men in that Serbian team. Vidic has 43 caps, and is usually partnered by Chelsea’s Branislav Ivanovic, both bring a wealth of experience to Antic’s side. At full-back, Antonio Rukavina, Aleksandr Kolorov and Ivica Dragutinovic are usually the main men chosen by Antic to complete the back four. Breaking through, Neven Subotic of Dortmund, Nenad Tomovic of Genoa and Jagos Vukovic of PSV, who made his debut in Belfast, are all defenders challenging the large presences of Vidic and Ivanovic.

In the middle of the park Serbia have a real collection of talent, starting with the captain Dejan Stankovic, who plays his football at Inter Milan and has 85 International Caps. Gojko Kacar and Nenad Milijas, are the more defensive-midfielders who bring a soildness and structure to their midfield. Zdrako Kuzmanovic of Stuttgart is one who is starting to make a name for himself as a tall, elegant midfielder with a really dangerous shooting ability. Milos Krasic of CSKA Moscow and Zoran Tosic of Manchester United are two players I rate very highly, Krasic has a powerful run when he has the ball at his feet and has burst on to the scene in the Champions League. Tosic of Manchester United hasn’t had the same influence as we thought when a large fee was paid to Partizan Belgrade, but if you watch the lad for Serbia you’ll see exactly what is to come from Tosic who is one of many products from the Black and White half of Belgrade, to name a few, Adem Ljajic, Radoslav Petrovic & Ljubomir Fejsa. 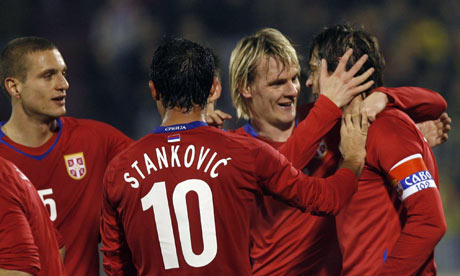 Milan Jovanovic of Standard Leige is the main in-form attacker for Serbia with 5 goals in qualification. Jovanovic, a certainty to travel to South Africa, can also play wide-left and has done on many occasions. Marko Pantelic, Nikola Zigic and Danko Lazovic have 29 goals between them and supply Antic with a major selection headache. Lazovic is the more technical striker of the three, and I would think he will partner Jovanovic as Pantelic and Zigic are much more static than Lazovic, who provides work-rate and pace.