Times have been hard for Benfica in recent years, consistently overshadowed by Porto on the domestic front and failing to make any lasting impact on the European stage there has been little to celebrate for Portugal’s most successful club.  However having built a squad around a core of talented South Americans 2009/10 has seen the emergence of an Eagles side which looks capable of recapturing the successes of yesteryear.  This has certainly been apparent in the Europa League where some impressive performances, the most recent a 5-1 aggregate hammering of Hertha Berlin have put the Lisbon side amongst the favourites for the competition.

The Eagles strike force was made entirely in South America with Paraguayan Oscar Cardozo and Argentinean Javier Saviola leading the line.  Saviola has slipped under the radar in recent years but is fast regaining his form as the little part of a little and large partnership with Cardozo.  The potency of this combination was showcased to devastating effect during the group stage clashes with Everton.  The English side were expected to provide a stern test but were dispatched with ruthless ease.  Hammering the Toffees 5-0 at home Cardozo and Saviola bagged a brace apiece and both found the net again in a 2-0 victory at Goodison Park.

In midfield Pablo Aimar who like Saviola has struggled in recent years it getting back to the levels which saw him win the competition with Valencia in 2004.  There is also the versatile Ramires, capable of playing across the midfield the 24 four year old has adapted well in his first season in Europe and looks a good bet to make the Brazilian world cup squad.    However the name on everyone’s lips is that of 22 year old Argentine winger Angel Di Maria.  Perhaps the most wanted player in Europe at the moment Di Maria has been linked with host of clubs including Manchester United, Chelsea, Real Madrid and Inter Milan.  His performances have shown why.  With five assists the Argentine is the competitions joint leading goal provider and he has scored in every round, including a match winning brace against AEK Athens and a crucial away goal in Berlin.   Now a fully fledged Argentinean international few expect Di Maria to stay in Lisbon for long but the Europa League trophy would certainly be a welcome leaving present 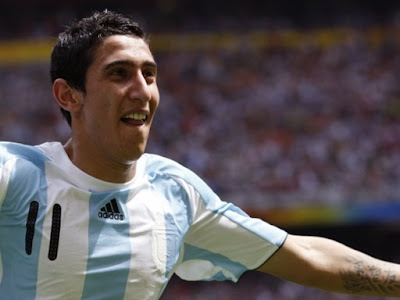 This South American presence is not just restricted to attacking flair with Brazilian centre back pairing Lusiao and David Luiz ensuring that the Portuguese side have kept a clean sheet in five of their ten European games.  Club captain Luisao is an established Brazilian international while 22 year old Luiz is widely regarded as a Selecao star of the future.

Twice European cup winners Benfica’s best performance in the Uefa Cup was finishing runners up in 1983.  Yet if this seasons form and the ability of their South Americans stars is anything to go by the Eagles may well be adding the Europa League to the trophy cabinet.  However, to do so they must begin by dispatching tough opposition in the form of Olympique Marseille.  The French giants can also claim to have underachieved in recent years and will certainly pose a difficult challenge but the ease with which Everton and Hertha were conquered means confidence is at a premium. After years of hurt Benfica are finally back on the glory trail and winning the Europa League is now a realistic ambition.  Should they go on to lift the trophy the Eagles will have captured a historic European victory but ultimately it will be one which was made in South America.