Never have I seen a game where the phrase ”the defences were on top” is so fitting. The Match of the Day pundits said the game could have carried on until midnight and neither team would have scored and that seems about right.

After the unfortunate loss of Mamady Sidibe in the first few minutes, none of our players were able to compete with Brede Hangeland for any aerial challenges. Despite this, worryingly, a lot of our players, with Danny Higginbotham and Andy Wilkinson being the main culprits, still hit the ball long frequently, when it was clear that we were likely to lose possession by doing so. After being completely outplayed in the first half at Newcastle last week, we changed things in the second half, playing with a higher tempo, pressing the Newcastle players and passing the ball well. Yesterday we showed no signs of doing that. Our lack of adaptability is all well and good when yo are stifling a point out of a blunt side like Fulham, but we really must show more depth to the way we play as a team against the better sides, or we will be torn apart.

It seems that whenever Ricardo Fuller is not on form, the overall Stoke performance and result is a disappointing one. He was in one of his mardy moods yesterday, after receiving an early booking for a late tackle he spent the majority of the rest of the game appealing for decisions and looking moody, with the exception of the couple of times he got the ball down and ran at the Fulham defence, one of which almost resulting in a goal for Richard Cresswell.

After an early booking, and given his propensity to waive the ”respect the referee” convention, Fuller was always going to be walking a disciplinary tightrope, culminating in the second half clash with john Pantsil. After Fuller gave away a dubious free kick against Pantsil, the two squared up to each other, before Pantsil pushed his forehead into Fuller’s, making slight contact, stood still for a full three seconds and then hurled himself to the ground clutching hi face, making out that Fuller had struck him violently. His actions were frankly, a disgrace, knowing Fuller was already on a yellow card, he deliberately tried to get him sent off by simulating Fuller striking him. In my, admittedly biased, eyes, Pantsil should be given a retrospective ban of at least three matches as we try and remove the element of cheating from the game.

The decision not to take any action on Fuller was a correct one by referee Stuart Atwell, but aside from that he had a very poor match. He seemed to award every niggling free-kick Fulham’s way, while constantly waving away fouls on Stoke players. The suggestion that I am biased towards Stoke in my view of this may be made, but the statistics speak for themselves; fouls given away by Stoke – 18. Fouls given away by Fulham – 4. We have a reputation as a strong physical, even dirty, team, thanks in no small part to the words of one Arsene Wenger, and I feel at times referees an affected by that, overcompensating by giving every physical challenge as a foul against Stoke.

The one big decision did go in Stoke’s favour though, Higginbotham clearly handling the ball from a cross in the first half, Atwell declining to a clear penalty. Although I’d never want to see a penalty given against Stoke, this was an example of very poor refereeing, and in any other situation I’d be angry that the penalty hadn’t been awarded. After awarding the infamous ”phantom goal” to Reading earlier this season, and making numerous important errors in the high pressure Notts Forest v Derby derby, Atwell was demoted to the lower leagues, and there he should stay in my opinion. What’s worse than his poor decision making, he seemed to be influenced by the crowd. The Stoke fans really got on his back after a while, culminating in him awarding several free-kicks to Stoke in quick succession in an attempt to pacify the crowd. On the subject of the atmosphere, while loud as always, it was strangely unpleasant yesterday, with the majority of the noise generated to rile the referee and the Fulham players, not to support Stoke.

On the day, most of the Stoke players were little better than average, with the exceptions of the always excellent Abdoulaye Faye and, encouragingly the other two Senegalese players on the pitch, Amdy Faye and Ibrahima Sonko. Neither of them put a foot wrong, despite having their detractors after past performances. I think that possibly, Salif Diao and Amdy Faye, the usual midfield pairing, are too similar players to each other, each being at their best in the holding midfield role. When they play together they sometimes get in each others way, and our midfield is far too defensive, with no-one from in getting forward to help the attack. With Diao out injured, Faye was able to shine, bossing the defensive midfield area, which allowed Glenn Whelan, starting alongside him to get forward more and support the strikers.

One thing that concerns me about Stoke is while, we have spent a total of almost £4 million on two quality midfield players in Michael Tonge and Tom Soares, they are being limited only to cameo appearances, with players from the old Championship squad like Danny Pugh and Richard Cressell preferred. It seems strange that we would pent the money if we didn’t intend for them to play a bigger part, particularly Soares, who for the second game in a row didn’t even make the bench.

The opponents, Fulham, looked a good passing side, with very little penetrative powers. That is to say, they are the West Brom of the south. Unlike West Brom though, their defence is very solid, so they can afford to not score many goals as they don’t concede man either. They are far too good to go down, but not good enough to challenge for Europe this season, and I see them finishing anywhere between ninth and fourteenth.

Thomas Sorensen (gk):Sorensen didn’t have a difficult save to make all match, but he was put under pressure from several good crosses. He has a tendency to punch rather than claim, which is all well and good if you make good punches, as he usually does, but on one occasion yesterday he made a very weak punch, which Fulham should have done more to capitalise from. A good clean sheet. 6

Andy Wilkinson (rb):Making his first league appearance since August, Wilkinson didn’t look great. He is very strong in the tackle, but his distribution is poor and he lacks composure. I’d be concerned if he were a regular starter, but he is third choice right back really, behind Andy Griffin and Andrew Davies so I’m not too bothered by this. 6

Ibrahima Sonko (cb): Ibrahima had easily his best game for Stoke, winning everything in the air and on the ground. While his positional sense his been lacking in some games, it was spot on yesterday, allowing the dangerous Andy Johnson very little. He’s back to full fitness and will look to establish himself in the defence alongside Abdoulaye Faye, and on showings like that I’d be delighted to have him there. 9

Abdoulaye Faye (cb): Another very good performance from Abdoulaye, he won a lot in the air and gives the defence the calming influence it has lacked in past years. He was captain in the absence of Griffin and did very well in the role, particularly calming down Fuller after the Pantsil incident. 8

Danny Higginnotham (lb): Higginbotham was poor yesterday. He hoofed the ball aimlessly long far too often, making it all too easy for Hangeland and the Fulham defence. He didn’t get forward as well as he has done recently either, and was very lucky not to give away a penalty after a stupid handball. 4

Rory Dealp (rm): Delap needs to be rested for a game or two, simple as that. He looked knackered out there, and with his throws not working due to a shoulder injury, he added little to the team. He should be dropped for a game or two and hopefully he’d come back as good as ever. 5

Glenn Whelan (cm): Whelan is usually very good when he plays, but yesterday was not one of his better performances. He failed to take the game by the scruff of the neck in the same fashion he did against Newcastle. A good contribution from a player like Glenn could have made all the difference. 5

Amdy Faye (cm): A truly excellent performance from Amdy. He did everything right, winning every tackle and not misplacing a single pass. 9

Danny Pugh (lm): His sudden rise back into the first team is a peculiar one and he had an average game yesterday, doing little wrong but nothing great either. 6

Mamady Sidibe (cf): He is payed to win flick ons, and it was in doing so that he was injured after just ninety seconds, so I’ll give him the benefit of the doubt with a seven. 7

Ricardo Fuller (cf): After his heroics at St. James’ Park, this was a disappointing performance from Fuller. He failed to influence the game in the positive way he can. 5

Richard Cresswell (cf): Effectively had a full game after the injury to Sidibe so early. He did little, which is not surprising when players smack the ball long to him up against a six foot six centre back. 5

Michael Tonge (lm): Tonge failed to influence the game after his introduction with half an hour to go. I still think he should be given a chance to stat for a few games though. 5

Vincent Pericard (cf): Often a slating boy for the Stoke fans, Pericard did surprisingly well, winning a few aerial balls, despite the fact that he cannot jump, and producing a moment of magic to get away from the Fulham defence, pity his finish was poor. 7

Men Of The Match:  Amdy Faye and Ibrahima Sonko

Both were excellent yesterday, and fully deserve their shared man of the match award. 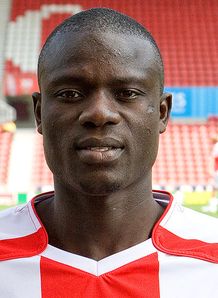 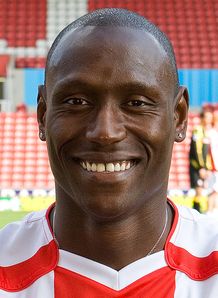