The Potters made it three league draws in a row following a bad tempered yet dour goalless draw at home to perenial travel sickness sufferers Fulham. The best chance of the game in which the defences were well and truly on top fell to Stoke’s Richard Cresswell on the half hour mark but the striker/winger could only guide the ball over the bar after he was played in by Ricardo Fuller.

The match was full of controversy, with young referee Stuart Atwell, famed for awarding the ”phantom goal” to Reading at Watford earlier this year, turning down two strong penalty claims for the visitors, who he seemed to favour throughout the majority of the match, and then decline to show Fuller a second booking after a clash with John Pantsil, after Pantsil went down holding his face though there was little if any contact between the two.

Stoke were without three first choice players, with Ryan Shawcross, Andy Griffin and Salif Diao all missing out through injury, with Ibrahima Sonko, Andy Wilkinson and Glenn Whelan all starting in their absence while top-scorer Fuller returned to the starting eleven in place of Cresswell and Rory Delap started in spite of a shoulder injury. Fulham boss Roy Hodgson was forced into making a change to his side for the first time in four games with American Clint Dempsey starting in the place of the injured Bobby Zamora.

Within two minutes from kick-off, the home side suffered a major injury blow, the influential Mamady Sidibe landing very awkwardly on his knee after winning an aerial ball. Despite his brave efforts to continue, the Malian international had to be withdrawn, with Cresswell coming on in a move that meant giant Fulham centre back Brede Hangeland would have a much more comfortable afternoon than anticipated, with Cresswell offering not nearly as much aerial ability as the departed Sidibe.

Sidibe is stretchered off just minutes into the game

Fuller then blazed a long range effort over the bar before Fulham began to establish themselves on the game, playing some neat yet mostly unpenetrative football they could and probably have had a penalty after fifteen minutes, Danny Higginbotham clearly handling Jimmy Bullard’s cross, but Atwell simply waved away the claims for the Fulham men, allowing play to continue upfield. It really was a lucky escape for Stoke in a game where few refereeing decisions went our way, with manager Tony Pulis later admitting that a penalty should have been awarded. 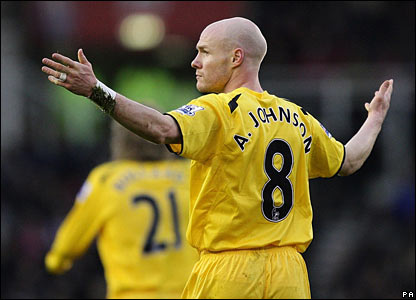 Remarkably little happened in the next twenty minutes or so, until Fuller picked up the ball on the edge of Fulham’s penalty area. Despite being urged to shoot by the Stoke fans, the Jamaican delayed playing the ball for some time before brilliantly slotting in Cresswell who, with only ‘keeper Mark Schwarzer to beat, fluffed his lines, sending the ball both high and wide of the goal.

The rest of the first half, like the first half hour of it had been on the most part, was a scrappy affair, Fulham producing their first effort on target through Andy Johnson’s glanced header which failed to trouble Thomas Sorensen in the Stoke goal and the Potters also produced their first goalbound effort, coming bizarrely straight from a Sonko long throw. The Senegalese defender took over long throw duty from Delap after his injury proved so bothersome that his first effort traveled all of two yards, much to the delight of the small Fulham contingent inside the stadium. Sonko launched the ball into the box, and it appeared to be creeping just inside Schwarzer’s left hand post, the veteran ‘keeper taking no chances in case it had taken a deflection off one of the many players in the box and diverting it wide for a corner.

Sonko is a cool character both on and off the pitch

The second half was no better than the first, with the Stoke faithful becoming increasingly annoyed at Atwell’s continuous inconsistent refereeing, and it was as a result of another contentious decision that the game’s flashpoint came on the hour mark. Fulham right-back Pantsil went down in close proximity to Fuller and was given a free kick despite their being little contact between the two. Fuller, in typical moody fashion reacted badly to the decision, squaring up to the Ghanian, who promptly threw a hand to his face and himself to the ground, miming a strike from Fuller, when in truth, any contact had been intimated by Pantsil. Both players escaped without caution, fortunately for Fuller and Stoke as he had already been booked for a late tackle early on.

With the game petering out towards the bore draw that looked likely before kick-off, given Fulham’s solid defence and the difficulties Stoke have in breaking down teams, and both sides were limited to half chances. Dempsey hit a stinging shot just wide from range before Johnson was denied by a fine last ditch challenge from Sonko just as he was about to pull the trigger after finding space in the Stoke box. For Stoke midfielder Amdy Faye saw his powerful effort deflected over the bar before substitute Vincent Pericard, making his first Premier League appearance of the season, fired wide after breaking free of the Fulham defence following a skillful flick.

The game ended a dull 0-0 then, a fair result in a game in which neither side ever looked like scoring and the main talking points surround the refereeing of Stuart Atwell rather than the footballing actions of the players he is charged with keeping in order. Stoke remain in thirteenth position with twenty points, while Fulham fall a place to tenth, a point better off than Stoke.