An 85th minute goal from super sub Mohamed Gedo was enough to secure a third consecutive African Nations Cup trophy for the Pharaohs. A heroic performance from a youthful and injury ravaged Ghana side was not enough to lift the trophy, despite giving Egypt their most vexing test of the tournament.

They said the Ghana squad was young . . .

For Egypt, records are there to be broken, and that’s what Hassan Shehata has done by monopolising the tournament over the last six years, having never lost an ANC match. An Egypt team, minus star player Aboutrika, proved the fluidity of their football is a mentality that runs right throughout the squad, as they were once again the best team in the tournament.

Ghana, however, proved a tougher test than their other victims en route to the final. With the impressive Asamoah Gyan leading the line, chasing, and winning, lost causes, the Black Stars were not to be underestimated.

A change in formation for the Pharaohs meant that a spark had seemingly fizzled out of the midfield, with usually pinpoint passes going astray. And Ghana coach Milovan Rajevac appeared to be ahead in the tactical battle, with their inexperienced but solid defense proving tough to penetrate. Egypt, however, were not keen to commit too many players to attack, as they looked very susceptible to the pace of the Ghanaian attacking line on the counter attack.

Asamoah looked the most likely to break the deadlock in early proceedings, and the Rennes striker tried his luck from long range with a speculative effort, but Essam El Hadary smothered the ball as it bounced in front of him.

Not long before the interval, the Ghana players wanted to see the yellow card brandished in the direction of Hassan, when the Egypt captain appeared to move his hand towards the ball after a failed attempt at a diving header.

As the first half drew to a close, an increasingly frustrated Egypt were searching for some remnants of rhythm. Rajevac would have been the happier of the two managers, as hitherto his side had achieved three consecutive 1-0 wins.

Ghana were frustrating their opponents in the first half

With the second half still in its infancy, it was André Ayew who tried his luck from range. A fluid move from the Black Stars opened up acres of space, which the speedy winger drove into before firing his shot wide.

Egypt felt they were due a penalty mid-way through the half, when an unusually quiet Ahmed Hassan went down rather easily under a challenge when attempting a header in the box. But with 20 minutes remaining, Hassan Shehata gave the fans what they wanted. Super sub Mohamed Gedo was brought on, and the fans suddenly found their voice again.

The Pharaohs were still finding it difficult to cope with the Ghanaians, both in attack and defense. And Asamoah Gyan’s eyes lit up after 73 minutes. The ball fell kindly in his path, but his attempt to curl the ball into the top corner cleared the bar.

With extra time looking ever more likely, substitute Gedo put the game beyond the Black Stars. A clever one-two meant the striker suddenly found himself inside the box, and he kept his composure to curl the ball past the Ghana ‘keeper. That goal means Gedo finishes the tournament top scorer with five goals, having not started a single match. The new prodigy of Egyptian football used what playing time he did get to win the competition for his nation. 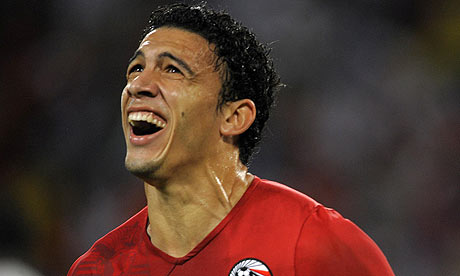 Ghana were not done yet, however, as they searched for an immediate fight back. 89th minute substitute Eric Addo squandered a glorious opportunity as the ball fell to his feet in the penalty box, but his failure to keep his composure acted as the final sign that those attempts were all in vain.

And then came the familiar scenes of Egyptian celebration, with El Hadary again leading the pack, perched upon the crossbar. Possibly the greatest team African football has ever seen, this win will act as an endorphin, but when the summer comes around, they will still be wondering “what if” as they sit at home.

Can Egypt Break Down Ghana to Retain Their Title?