Swansea heap more away misery on The Posh.

Swansea cemented their position in the play-offs after a 1-0 victory at the Liberty Stadium which meant Posh’s poor away record continued.

Jim Gannon had to deal with Craig Mackail-Smith, George Boyd and Aaron Mclean, three players generally regarded as the catalysts behind Posh’s last two promotion pushes, all out with a timely ‘illness’, whether the official reason they were left out is actually to be believed is up for debate. Gannon still persisted with his favoured 4-2-3-1 formation however with Tommy Rowe being pushed forward to left winger and Scott Griffiths coming in at left-back, Liam Dickinson continued as the lone striker. Exodus Geoghagon also returned to the starting line-up to replace the injured Ryan Bennett.

Paulo Sousa squad was buoyed by the news that Ferrie Bodde, a very highly rated player at Swansea, made his return from his troublesome knee injury that had kept him out for since September.

Exodus Geoghagon’s long throw created the first scare for the home side early on but it evaded everybody and travelled out for a goal-kick. It was an early warning for the ‘Swans’ who had already conceded a goal at London Road, from a Geoghagan throw.

After an excellent run from Darren Pratley, forcing his way through a number of Posh players tackles, Shefki Kuqi saw his first chance of the game firing a shot from the edge of the area, after being given far too much time from the Peterborough defence, but Joe Lewis’ made a good save tipping the ball out for a corner kick.

Ferrie Bodde was next up to try his luck for the home side but his long-range effort went just wide of Lewis’ far post with the Posh goalkeeper at full stretch. Shots like these show why the Dutchman Bodde is a firm favourite amongst the ‘Jacks’ crowd.

Posh then gifted Swansea City the first goal of the match. After passing the ball around the back line for some time Posh played it into Charlie Lee, the centre midfielder’s touch was very poor and allowed David Cotterill to nick the ball off him and run into the box were a combination of Lee and Geoghagon bundled him over. Cotterill took the penalty himself and slotted the ball past Lewis’ into the bottom left hand corner of the goal. 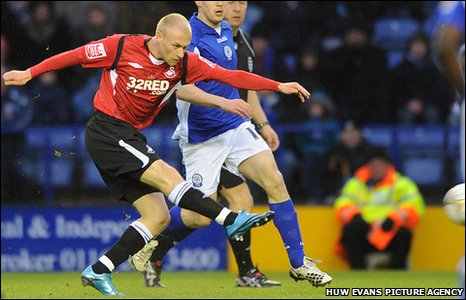 Reuben Reid did well to cut inside but his effort from just outside the area was curled wide of Doris De Vries goal. The curling effort was Posh’s first shot of the match.

Swansea fans were left cursing their luck however as their already injury plagued squad was hit by two more; Darren Pratley and Ferrie Bodde. Pratley was withdrawn after taking a kick to the knee and the injury prone Bodde is once again set for a period on the side-lines with his knee injury. The veteran Lee Trundle and Mark Gower were the two replacements.

Charlie Lee was next to try his luck for Posh after he was moved into a more attacking midfield role but his effort went just over the bar, in truth though it was always rising.

Geoghagon made a horrible error playing a back-pass straight into the feet of Shefki Kuqi but his close range effort was saved superbly by the feet of Posh ‘keeper Lewis. The rebound fell to Nathan Dyer but his shot was cleared off the line by Geoghagan who went some way to rectify the mistake that had originally put the visitors in trouble.

Cotterill continued to cause problems for the Peterborough defence and he was left with too much time on the edge of the box but curled his shot straight into the Lewis’ hands.

Nathan Koranteng was brought on to replace Charlie Lee, who had a poor first half, and to give Posh more pace on the break. It was Koranteng’s debut for Posh after he had been brought through the youth system. Youngsters Billy Crook and Danny Mills were also named as substitutes as Gannon continues to show his faith in young talent.

Another Exodus Geoghagon long-throw was hurled into the box, it looked Posh’s most likely source of scoring, the ball fell to Tommy Rowe but the ex Stockport players header went wide of the post.

Shefki Kuqi then missed a clear cut opportunity when the pace of Nathan Dyer saw him able to put a low cross into the box but the striker blazed a close range effort over the bar. If Nathan Dyer’s pace was causing problems for Tommy Rowe, who was forced to move back to left-back after Scott Griffiths went off injured, then Koranteng’s was also causing problems for Angel Rangel. It was the debutants excellent cross that picked out Lee Frecklington, who ran from deep, but his header went just over the bar.

Lee Trundle’s goal-bound effort was blocked well by Craig Morgan in the Peterborough defence as Swansea looked to threaten on the break as Posh committed more men forward to try and restore parity. And it was from Posh throwing men forward that Swansea created two more great chances to extend their lead. The first fell to Shefki Kuqi but his shot was saved expertly by Lewis and the second to Nathan Dyer but once again a great save from Lewis stopped Swansea from putting the game beyond doubt. The final chance of note in the match came to Liam Dickinson after Chris Whelpdale’s pass eventually found his way to the striker but his powerful volley was deflected and flew just over the bar.

It was a long trip for the Posh faithful to come back with nothing but it highlighted how far the team had come, they were by no means dominated by the hosts, who are flying high in the league. They actually had more possession than a team described as “the best footballing side in the division” but failed to create many clear cut chances against a very solid Swansea defence who were allowed to drop deep after the early goal.