As with several of these World Cup groups, there is one team who are head and shoulders above the rest leaving three teams to battle for 2nd place. The Swiss will be hoping to oust Chile and Honduras for the precious qualification spot most likely behind Spain. Switzerland qualified from a relatively weak group to make it to South Africa 2010. Even a 2-1 defeat to Luxembourg didn’t stop them topping the group by a point over Greece.

Experienced manager Ottmar Hitzfeld will look to lead the team to Round Two although key players such as Alexander Frei will have to perform to achieve this goal. From watching the Swiss in previous tournaments, they tend to be well organised but lack the creative spark to win matches. However, if they did qualify in second place, they are likely to face Brazil in round two.

The team are not blessed with a wide depth of talent if an injury crisis strikes. However, they do have a solid core of European based players who tend to make up the majority of the squad for every recent international tournament. Here are the players most likely to be involved depending on their injury status. 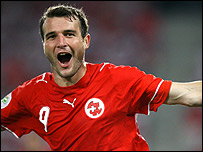 In recent times, Switzerland don’t have a particularly good record in the early stages of international tournaments. Ottmar Hitzfeld is a talented manager and may be the secret ingrediant needed to get through to the knock out stages. However, I’m tipping them for an early exit in the group stage as the majority of their players are those who also previously flattered to deceive at Euro 2008.