In the last few weeks there have been two very high profile incidents involving premier league players: Luis Suarez & Patrice Evra and John Terry & Anton Ferdinand. The latter incident occurred last Sunday during the West London derby. The incident between Suarez and Evra occurred in the match at Anfield on the 15th October. In this article I will be analysing both incidents and seeing the views of those in the world of sport. With major emphasis on the Kick It Out campaign this season I’m surprised to see two high profile incidents.
Firstly, I’m going too look into the Terry & Ferdinand incident which was first highlighted after the match at Loftus Road. With tempers and spite running high throughout the match it was no surprise to see plenty of bookings and those two Chelsea red cards! I saw the match live on Sky and I didn’t consider the match as a major derby however I have changed my mind. The fans reaction at every booking, free-kick and corner kick shocked me. One incident in particular was when Frank Lampard took a corner and many QPR fans were throwing coins etc at the Chelsea midfielder. The behaviour of the fans was absolutely disgusting, the match is definitely a derby! Also, on numerous occasions we saw heated exchanges between Terry and Ferdinand and it   has been suggested that Ferdinand was racially abused. 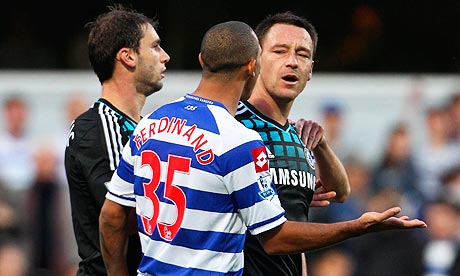 Both players have publicly spoken this week and here is what John Terry had to say on events:
“I’ve seen that there’s a lot of comments on the internet with regards to some video footage of me during the game.
“I am disappointed that people have leapt to the wrong conclusions about the context of what I was seen to be saying to Anton Ferdinand.
“I would never say such a thing – and I’m saddened that people would think so.”
“I have known Anton for a long time and spoke to him about it after the game and there was no problem between us,”
“I congratulated him on their win. He has not accused me of any wrongful remark. It was clear it was all a misunderstanding at the time.
“After the result today, I am saddened to be dealing with these wrongful allegations.”
Terry this week has welcomed the FA’s investigation into the allegations and claims that it will clear his name. Terry has denied any wrong doing and even claims Anton Ferdinand has accused him of nothing. Did we, the fans misinterpret events last Sunday?
Here are Ferdinand’s views(in quotes) on a week he describes as “crazy” :
“The last few days have been crazy,”
“But I’m looking forward to Sunday’s game and am fully focused on football.
“Anyone who knows me will know that whatever’s going on, football’s always going to be my number one priority.”
“There’s been other situations, but it’s certainly up there. But these types of situations are what make you.”
It seems Ferdinand is focused and ready for the next match against Spurs on Sunday despite the media hype surrounding him. Ferdinand has come out and asked for an end to this and a resolution is needed quickly. Anton Ferdinand has praised other players in their support for him during this difficult time.
I would really like to hear your views on events from this week so feel free to comment!!!!!!

Father & Son told to ‘move on’ by Police after asking if action was going to be taken against IRA chanting
Where Next For The Likeable Sven-Goran Eriksson?