2009 in Scottish Football was like a roller coaster ride at Alton Towers. From the disappointment and embarrassment of the Scottish Clubs in European Competition to the climax of another final day league battle between Rangers and Celtic plus the relegation climax which saw Inverness lose their SPL status.

January began on a sombre note for the fans of St Mirren who played their final match at Love Street  in front of a packed house of 10,189 before moving to the new St Mirren Park. Celtic headed north for Aberdeen on the 18th when they were hammered 4-2 by a rampant Aberdeen side which cut the gap at the top to two points as Rangers managed to beat Falkirk the day before. The end of the month saw the emergence of Rangers midfielder John Fleck who scored the vital goal for Rangers in a 1-0 win over Dundee United. 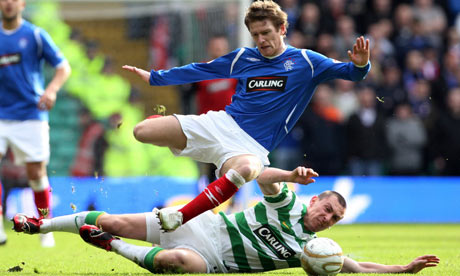 League leaders Celtic started the month with two 0-0 draws against Inverness and then in the 2nd Old Firm derby of the season at Celtic Park which was deprived of any real action. Gordon Strachan’s side continued to drop points throughout February with a 1-1 draw at Motherwell which saw Rangers take pole position at the end of the month. At the bottom of the table, 5 teams found themselves in a relegation dog-fight with only 8 points separating them. 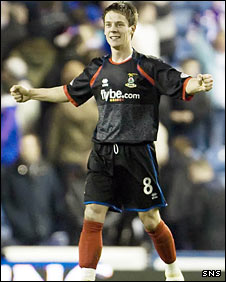 March started with a shock was lowly Inverness Caley scored a last minute winner at Ibrox to allow Celtic the chance to leap frog Rangers in the title race. Between Celtic, Rangers and Hearts, points were thrown away at most opportunities which made for great viewing. Hearts lost to Hibs in the Edinburgh derby, then went to Ibrox to come from 2 behind to leave with a point and a Lee Naylor volley secured a scrappy point at Dundee United for Celtic. 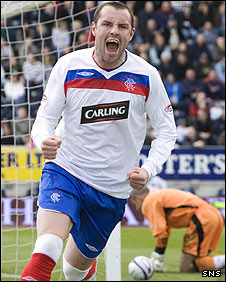 April saw the boozegate saga disrupt Rangers’ momentum in the final run-in for the title as Allan McGregor and Barry Ferguson were dropped from the Rangers first-team which saw Neil Alexander and Maurice Edu replace them in the side. There was something brewing at Ibrox and their 1-0 win at Falkirk was the start of an absolutely superb run of 12 games unbeaten which would ultimately see them lift silver in May.

The league was finally taking shape in the final months and thanks to wins over Hearts and Celtic, Rangers leaped back to the top of the SPL going into the final 3 games. On May 23rd we saw a pulsating climax to the relegation battle in the SPL when the “relegated” tag swapped around through the 90 minutes but Michael Higdon’s crucial goal at Inverness for Falkirk was the defining goal as Inverness were relegated from the SPL, with St Johnstone replacing them for the new season. The battle for the title came down to the final day and Rangers came out on top thanks to a superb 3-0 victory away to Dundee United with goals from Lafferty, Mendes and Boyd. Celtic’s afternoon was made worse and in Strachan’s final match, Celtic drew 0-0 with Hearts, who themselves finished 3rd.

At Celtic Park, Strachan was out and Mowbray was in as the Celtic board aimed to snatch the title back from Rangers. The Champions lost more than 12 first-team players in the summer and signed only Jerome Rothen on loan. John Hughes left his post at Falkirk to take up a life-long dream as Hibs manager. Motherwell also changed manager by bringing in Jim Gannon who replaced Mark McGhee as he headed for the Aberdeen post after it was left empty by Jimmy Calderwood.

Celtic got the SPL off to an impressive start with a 3-1 win at Aberdeen on the first match shown on Sky Sports who were the SPL’s new broadcasters alongside ESPN after the demise of Irish broadcasters Setanta Sports. A controversial last-minute penalty gave Rangers a 2-1 at Tynecastle early in the season, The Gers coming from a goal down. The results for the Old Firm in the capital continued as Georgios Samaras headed home the winner as Celtic beat Hibs 1-0.

By the end of September, Celtic had a 4 point lead over a Rangers side who had just drawn 3 games on the spin against Aberdeen, Motherwell and Kilmarnock. A last minute winner from Glenn Loovens gave Celtic a huge victory over Hearts. The bottom five were seperated by 2 points as newcomers St Johnstone were rooted to the bottom of the SPL with only 3 points from 6 games. A Kenny Miller brace gave Rangers the 3 points in the first Old Firm game of the season, with Celtic feeling aggreived after 2 good penalty shouts were turned down. St Mirren were the unlikely goalscoring team of the month after 8 goals in 3 games. It wasn’t just Rangers and Celtic aiming for top spot, Hibs and Dundee United were getting in on the act and the goals of Stokes and Riordan were a huge addition to John Hughes’ talented side. At the end of October, 3 points was separating the 4 teams at the top. 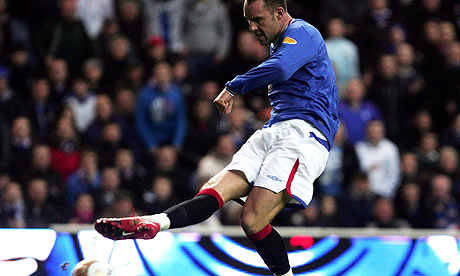 November saw 3 league wins for Rangers from 4 games and Hibs were continuing to put the pressure on the Old Firm as they maintained an excellent run of form which would finally be broken later in the year by Rangers. Kris Boyd and Kenny Miller were proving to be a clinical partnership as Boyd neared closer to breaking the SPL record held by Henrik Larsson and Kenny Miller ended 2009 with 12 goals from the season so far. Celtic were 4 behind Rangers at the end of 2009 after defeats at Hearts and Dundee United. Hibs were rampant until the SPL Champions destroyed them 4-1 at Easter Road just after Christmas but are still in the race. United have lost Craig Levein and were 12 points behind at Christmas but a good of form under the new manager will keep them in the race.

2010 is almost certainly going to be as exciting as 2009 with the added bonus of Hibs and Dundee United competing for the title alongside the Old Firm.