This blog is designed to choose the greatest ever Manchester City player in my opinion (remember I am only young!). I shall publish one of these every now and again until finally we reach the best player ever to have embraced Maine Road or The City of Manchester Stadium!

Bert’s story is one of an international importance and one that touches many different aspects of life, not simply sport. He is arguably the greatest MCFC figure of all and, as such, his place in the City Hall of Fame was guarenteed from the beginning. He recieved more votes than any other player and his is also recognised as one of the Football Leagues 100 greatest legends. However because I have only seen videos of him, he rates in my top ten at number seven.
Regardless of the German view during his career, it’s fair to say that England’s leading footballing figures recognised Bert’s greatness, especially in 1956 when he was awarded the Football Writer’s Association Football of the Year award. He was the first foreign footballer to be given this presitigious title. Gradually, through his skill, courage and sportsmanship, he won over the Nazi-critics. One game – at Fulham in 1950 – typified his experience. Incessant chants of ‘Kraut’ and ‘Nazi’ greeted him at Craven Cottage; ninety minutes later, following an outstanding display, Trautman left the field to a standing ovation. He firmly established himself in City folklore in the FA Cup Final of 1956 when he broke his neck 15 minutes from full-time. Incredibly, he continued playing and was able to collect his winner’s medal. he won the respect of the footballing community.

He was a true footballing legend who captured the true essence of what this club is all about. Heroes. 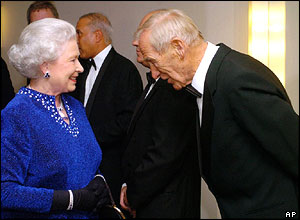