Top 10 Matches to see Before you die – Part One

“Football is said to be the most popular sport in the world and there are some great rivalries and derbies through out the world that are widely watched or fairly unknown outside of their countries. I’ve been lucky enough to travel to a fair number of countries and see the impact some of these games have on peoples lives. I’m sure with some of my choices your’ll agree or disagree over the weeks I write these. So please comment and let me know what you think.” Clifford Foster

My first choice is widely viewed as ‘the game you have to see before you die’ by many football fans around the world and is set in the country where I am currently based.

Buenos Aires is considered by many as the cultural Capital of South America. With it’s long boulevards with coffee houses, tea rooms, tango halls and shops that seem to stretch on and on. But the other highlight of Buenos Aires is the football and one of the  biggest rivalries in the city is between Boca Junior and River Plate. 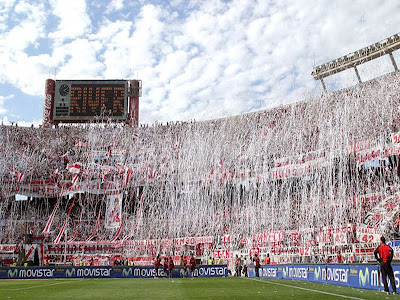 Both clubs started life in the La Boca’s workclass docklands. In 1925 River moved north to the more upper class part of the city called Núñez. Because of this the rivalry grew between the fans as one stayed working class and one became a more middle class (Both clubs do however have supports from all walks of life may i add) and so El Superclasico was born.

This long rivalry is best known for the passion the fans feel for it. With ribbons of each of the clubs colour (Boca/Blue and Gold and River/Red and White) hanging over the heads of each sets of supports. With each sets of supports singing, mocking and even fighting (Rivals and police) makes this match one of most electric atmospheres in the modern game. As any footballing rivalry both sets of supports insult the other with nicknames from both sides. Boca fans knowing River fans as ‘gallinas’ chickens because of their supposed lack of guts and River knowing Boca fans as ‘los chanchitos’ (Little pigs) because River fans say thats how Boca’s stadium and fans smell like a pig sty.

The football isn’t as fast as some European leagues but with these two huge sides you may get to see some future stars or older ones. Boca have had the likes of  Diego Maradona, Carlos Tévez and Martín Palermo and River the likes of Gonzalo Higuaín, Javier Mascherano and Esteban Cambiasso playing for the clubs. 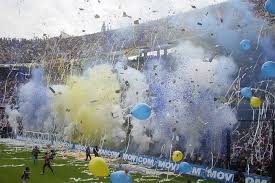 This is a must see for any football fan. With Both sets of fans know for their “bands” (“firms”) i would advise anyone lucky enough to go see this amazing football game to go in large groups and also to go to the El Monumental de Nuñez (River Plates Studium) rather than the Estadio Alberto J. Armando (Boca’s stadium) because of the location of the ground and access in and out of the stadium. With both teams in the Argentine Primera División this is a regular fixture and well worth the Long trek across the water.

Next part I’ll be travelling back to Europe to Scotland so keep a eye out for part two!