After missing out on Joao Moutinho at the last minute, Andre Villas-Boas has re-set his sights on bagging his first 3 points as Spurs manager. Both managers were cautious as the home team made one change from last match with Sigurdsson coming in for the departed Van der Vaart and Chris Hughton named an unchanged side which drew 1-1 against QPR.

Tottenham ended the half as the happier side as they could well be 0-2 down. It was only 8 minutes when right back Russell Martin headed Snodgrass’s lovely free-kick against Friedel’s crossbar. Spurs did little to respond as they struggled to conjure anything substantial and they had their veteran keeper to thank for producing a wonderful reflex save to deny Snodgrass’s heading Pilington’s cross from wide left behind the net. The Canaries’ high work rate in attack and defense saw them trouble Spurs, especially with crosses, and they finish the first half comfortably.

Spurs new signing Moussa Dembele came on at half time for Sandro as they searched for inspiration. After little drama, aside from an open header inside the box that Holt failed to hit the target, Adebayor was introduced at the expense of the disappointing Sigurdsson. However it was Norwich again who came closer to breaking the deadlock. Friedle defied his age by getting down on the ground quick enough to stop Pilkington’s low drive from close range. 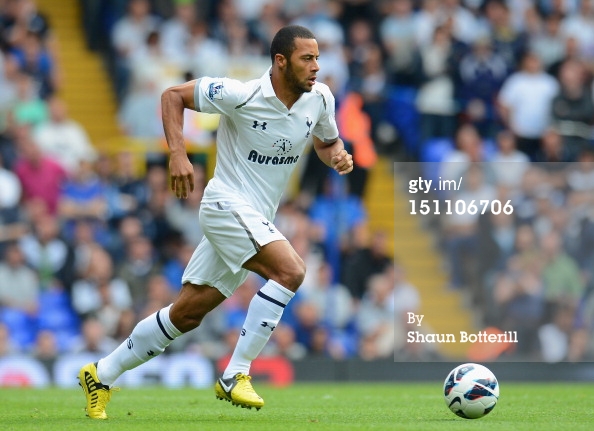 At 68th minute, the home crowd became lively again as Dembele, after a great bit of footwork just outside the box, sent his shot to the far bottom corner to open his Spurs account. Norwich, however, still lack a bit of luck as an obvious shirt-pull inside on a Norwich player by Assou-Ekotto did not impress referee Mark Halsey.

Chris Hughton’s men were finally rewarded with a deserved goal following a nice build-up with headers. Martin Russell headed back Pilkington’s far post cross back into play and Holt headed the ball again into the path of Snodgrass for the midfielder to volley in a similar goal Matt Taylor scored earlier against Fulham. In the dying minutes, Norwich was denied 3 points by Friedel again after Bradley Johnson’s thunderous strike set up by a Holt back heel was pushed away by the American. AVB will have more to worry than the poor form of his team as Kyle Walker landed awkwardly before the final whistle. 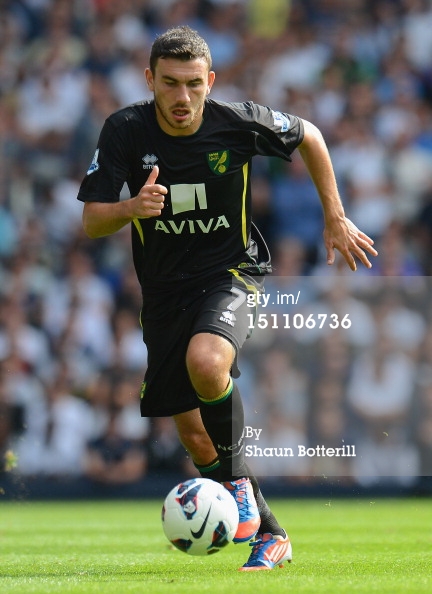 A Lively Performance from the Norwich Winger

Man of the Match: Robert Snodgrass. The former Leeds captain joined Norwich this summer and looked to have cemented a place in Chris Hughton’s starting lineup after putting up an all-rounded performance. His set-piece and crosses may not be as good as his Scottish counterpart Charlie Adam but was already sufficient to pick out his teammates against a vulnerable Spurs back four. His mobility to cut in the middle and take a strike also exposed the lack of communication between BAE and Vertonghen. If his form continues he may easily become Norwich’s signing of the season.

Flop of the Match: Gylfi Sigurdsson. With Van der Vaart gone, the Icelandic should emerge as the first choice attacking midfielder. However, deadline swoop Clint Dempsey could well expect himself to walk straight into the starting lineup after seeing this match. The former Swansea man was keen to impress but his eagerness and perhaps pressure to play at a big club has made him lose his composure on the ball. It was apparent he had little idea of what to do with the ball and often tried but failed to reproduce his crosses and shots we saw last season. He may still have class but his mental weakness could prove to be a stumbling block for him to impress.

Too Fast Too Furious: Having perhaps the fastest pair of wingers in the Premier League could have been a liability. AVB’s men found it hard to strike the right pace in attack as they were often caught in between having no teammates or too many opponents inside the box. Without Modric and Van der Vaart, Spurs could not control the tempo and hence found it difficult to harness the pace of Lennon and Bale, leaving players, fans and the manager frustrated and furious as possession failed to turn into substance. Joao Moutinho should have been the ideal metronome but AVB should now set his sights in quickly involving Dembele and Dempsey into the team.

Clint Dempsey’s deadline day move to Tottenham
It’s only Non League but I like it Blog 2: Will the early season curse strike Newport County?