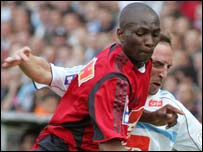 Long has been felt the need to bring in a long-term replacement for Gary Neville at right-back for Manchester United. The latest rumour to be reported by various newspapers is that Man Utd are interested in Cameroonian player Stephane Mbia. Mbia plays for French side Rennes, and although his favourite position is that of defensive midfielder, he can also play in right-back. He is also very young, at the age of 21, making him a good acquisition in the long-run, which is still capable of learning new things.

Mbia featured in the African Cup of Nations for his home nation Cameroon, playing in the match against Tunisia, and managing to score a brace. Teams like Barcelona and Liverpool are also said to be interested in hot prospect Mbia. It has been suggested that Manchester United have already agreed a contract with Stephane Mbia, which will commence when the French Ligue 1 is over. Since no official statement has yet been issued by Manchester United, this statement remains a rumour that may not have any factual truth. After capturing Angolan striker Manucho, Mbia would be only the second African player to be playing for Manchester United.