A second half penalty from Lionel Messi was not enough as a brace from Xabi Alonso led Spain to a 2-1 victory in a highly entertaining encounter with Diego Maradona’s Argentina side.

After narrowly qualifying from the South American qualifying group, many speculated that an Argentina side with no pressure on them would provide a tough challenge for the European Champions. Maradona’s 20 man squad was comprised of all European based players and looked significantly stronger than previous World Cup qualifying squads.

The visitors lined up in a 4-4-2 formation with Messi and Higuain leading the line and being supported by Angel Di Maria and Maxi Rodriguez from the wings. Javier Mascherano and Fernando Gago were instructed to hold the midfield in front of Fabricio Coloccini and Martin Demichelis. Young Rubin Kazan full back Cristian Ansaldi made his debut whilst Gabriel Heinze and Sergio Romero made up the rest of the Argentine starting line up. 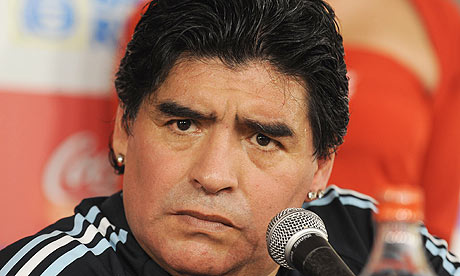 The Spanish, who were experimenting with a 4-3-3 formation in the absence of Fernando Torres, started the brighter as David Silva and David Villa both spurned good early opportunities when well placed

Even so, it was Spain who took the lead in the 16th minute with a beautifully constructed goal. A well worked move saw David Silva make space on the left before driving in a low shot that Romero did well to parry. However, the onrushing Xabi Alonso charged in to smash the rebound into the roof of the net to give the Spaniards the lead they deserved.

It took until the 25th minute for Argentina to have an attack of any real purpose. A good surging run from the ever improving Angel Di Maria opened up the Spanish defence before his pass to Higuain saw the Real Madrid striker blaze his effort over the bar.

Nevertheless, Spain continued to dominate proceedings and were unlucky not to find themselves two goals ahead in the 29th minute as another pass splitting move saw Villa’s shot somehow blocked on the goalline by Coloccini. Just five minutes later, Villa had another chance to get on the scoresheet but shot narrowly wide of Romero’s far post.

Maradona’s side could have taken an undeserved equaliser before the break as Angel Di Maria capitalised on some poor Spain defending but misjudged his chipped effort over the crossbar.

The Argentines started the second half with purpose and managed to win a penalty in the 59th minute. A two footed tackle from Maxi Rodriguez on Raul Albiol was surprisingly not penalised allowing the Atletico Madrid winger the chance to run into the box before being fouled by a desperate lunge from Albiol. Lionel Messi took responsibility and sent the keeper the wrong way with a guided effort in the bottom left corner to make it 1-1.

The aggrieved Spaniards set out to find a winner and were almost rewarded in the 65th minute as Sergio Ramos headed narrowly wide from a floated free kick.

It looked like Argentina were going to hold on but with just five minutes remaining, Spain won themselves a penalty after Martin Demichelis accidentally handballed in the penalty area following a goalmouth scramble. Xabi Alonso stepped up and hit an unstoppable penalty into the top right corner to give the European Champions a deserved 2-1 lead.

Maradona’s side almost managed a second equaliser at the death but Demichelis’ unmarked header from six yards sailed over the bar to consign them to a deserved defeat.