Dundee United will participate in the UEFA Europa League next season after a 2-0 defeat to Celtic at Tannadice which secured the Hoops a Champions League qualification tie next season. Goals from Diomansy Kamara and Robbie Keane saw off a strong United challenge with the Arabs missing a few good opportunities. 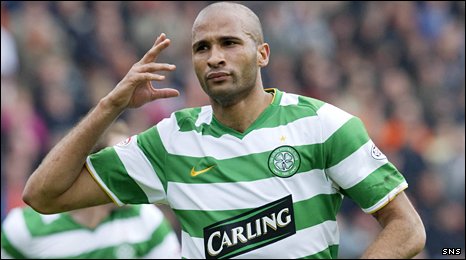 Kamara was on the scoresheet for Celtic

Manager Peter Houston continued his usual 4-4-2 formation which has served United well in the last 11 games with Goodwillie and Daly leading the attack. One of the most exciting things about United’s setup was the expansive midfield which had Craig Conway and Danny Swanson providing pace and width helped by the dynamism and defensive qualities of Prince Bauben and Morgaro Gomis. Irish full-back Sean Dillion continued at left-back after Paul Dixon’s was ruled out through injury and Andy Webster was on the bench due to a niggling calf injury. As for the away side, Loovens and Rogne were selected at centre-half by interim manager Neil Lennon, although they didn’t last very long as a partnership because both would leave the pitch with calf injuries.

The SPL’s in-form side started strongly and David Goodwillie immediately caused the Celtic defence problems with his pace and strength. The Scottish Young Player of the Year looked to have wandered into a difficult angle for the shot but his volley looked destined for the net but instead clipped the inside of the post and drifted out. United continued to show their dominance when centre-back Garry Kenneth found himself in a forward position and produced a sublime volley with his right-foot that fired towards goal but was blocked on the line by Dutchman Glenn Loovens.

Celtic took the lead through Diomansy Kamara after the half hour when he cooly slotted a left-foot shot into the corner of the net after his excellent touch from Brown’s pass found space infront of goal. The on-loan Fulham attacker was close to netting a second for Celtic when his glancing right-foot shot went wide from 6 yards.

Celtic looked comfortable despite the frantic tempo but United continued to pose a threat to Celtic’s Champions League ambitions and David Goodwillie cracked the post for the second time in the game after Daly’s knockdown set Goodwillie into space and his left-foot shot beat Boruc, but not the woodwork. Substitute Jason Myrie-Williams was sent off unfairly after two bookings and Mihael Kovacevic joined him off the pitch after a thigh injury which saw United down to 9 men. The game became stretched and a strong Celtic counter-attack was resulted in a penalty kick after Aiden McGeady was blocked by Dusan Pernis. Robbie Keane stepped up and fired the ball down the middle with the Slovakian Goalkeeper unable to keep it out.

Houston’s impressive United couldn’t fight back and were unable to realise ambitions of Champions League football, despite a solid 11-game unbeaten run. The Tannadice side will now have to settle for Europa League action with the Arabs set to join the tournament at the group stages next season.

Manchester United: What a Difference a Year Makes
Stars Of The Future – Javier Hernandez