In the days leading up to the recent “El Clasico’, the comparisons between clubs and players were being made. “Will the Madrid team of superstars conquer the might of Barcelona?.”  “Who will win the battle of the World’s best two players, Messi or Ronaldo?.” Ten minutes into the game the first goal was scored, but it was none of  the record summer signings who got the opening. It was a man who has been representing Barcelona since the age of eleven and who is regarded by many people at the club as Barcelona’s most influential player. His name is Xavi Hernandez, but known to most people as just ‘Xavi’.

Recently shortlisted for the 2010 Ballon d’Or, alongside fellow Barcelona team-mates Lionel Messi and Andres Iniesta, Xavi is now being recongnised as one of the top players in world football. Many current players, particularly those at Barcelona would tell you that Xavi has been one of the top players in the world for a number of years now. It is no real surprise, however, that it has taken so long for people to acknowledge Xavi’s talents. Unlike many of today’s footballing elite, Xavi does very little to draw attention to himself both on and off the football pitch. When playing, his only concern is for the team, and what he can do to help his fellow team-mates. He will rarely catch the attention of the spectators by jinking past defenders or by making heroic last ditch tackles. His impact on a game is more subtle, so unfortunately he is often overlooked by those watching it. Off the pitch too, Xavi is reserved and enjoys spending time with family and fellow team-mates. He will not be found advertising expensive brands, or looking in any way to promote himself. As a consequence of this, Xavi has not been as well known internationally as his ability would merit. Not that he seems too concerned. After being told the news that he was in the final three contenders for the Ballon d’Or he commented, “This is a Triumph of Barcelona, and of the Barcelona philosophy. I honestly do not care who the title is given to. I am very happy but it is a success for the whole team. It is a Barcelona Ballon d’Or.”

This concept of ‘team’ is something that Xavi would have learnt as a young player in La Masia (Barcelona’s Youth System). Xavi joined La Masia aged eleven and quickly learnt the Barcelona philosophy. “Everybody was treated as equal, and players lived more like a family, eating meals together and sharing their free time together.” This harmonious attitude off the field, translates well when the players perform together on match day. You only have to look at the current Barcelona side to see how hard they are willing to work for each other for the greater good of the club. 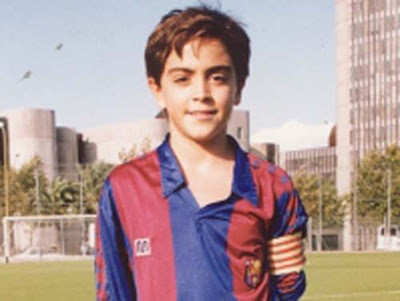 Xavi rose through the youth teams and aged eighteen was given his first start for the Barcelona First Team, playing under coach Louis Van Gaal. His debut was to show a glimpse of things to come as he scored within fifteen minutes. Unfortunately Barcelona went on to lose the game, but Xavi had impressed, and two months later made his League debut in a 3-1 victory over Valencia. It wasn’t long before comparisons were being made between a young Xavi and the club captain Josep ‘Pep’ Guardiola. It was in fact Guardiola who joked with Xavi, saying, “You will retire me.” In the 1999-2000 season Guardiola was forced out due to injury and Xavi was introduced as his replacement for a large part of the season. When Guardiola, aged thirty, left Barcelona to play in Italy, Xavi became the principal playmaker in the midfield- a position he has since mastered.

Xavi, however, is more than just a midfield playmaker. He is the heartbeat of the team. When Rinus Michels brought the world the concept of ‘Total Football’ in the 1970’s, he used Johan Cryuff as an on-field conductor, a player who could sense what tempo to play, and who could help the team control the game. Fortunately for Barcelona, when Cryuff was introduced as Manager he brought with him the ‘total football’ style of football and used Guardiola as his key man in midfield. Xavi now is the ‘on-field conductor,’ the player who understands the intricate details of the Barcelona Brand of football, and can apply each facet of it when necessary. In the 2008 European Championship Final, where Xavi was voted ‘Player of The Tournament,’ the German Coach Joachim Loew commented that “Xavi is the centre of Spain’s Perfect Spine’. 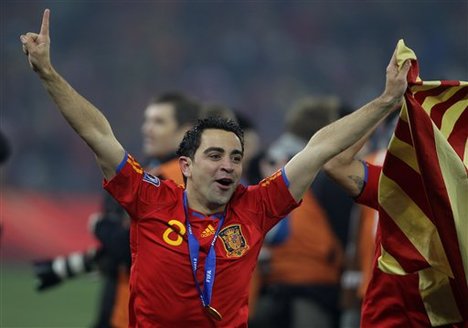 Xavi celebrates after winning the World Cup with Spain in 2010

It would have been easy in writing this to produce a long list of stats proving how Xavi makes more passes per game than any other player in World Football, and how his assists and goals have contributed to countless victories for both Club and Country. I believe that this would be doing the man a disservice. Xavi is more than just a superb passer of the ball. In fact, he is more than just one of the World’s Best Players. Xavi Hernandez is in essence, a man who plays football for the right reasons, and in the right way. He has remained loyal to his beloved Barcelona, and always treated the club and supporters with the upmost respect. He is also an excellent ambassador for Spanish football. Xavi can talk eloquently about various different football issues, and understands his role in representing both club and country. In today’s modern game it is refreshing to see a player who represents everything positive about being a professional footballer.

FC Barcelona – The best ever?
Barcelona are BEATABLE