A game which had everything, the tears, the drama and the passion.  Either side could have won the match in normal time but it was penalties that saw Zambia lift the trophy in Libreville.

Zambia started brighter and created an early chance for Sinkala after a well worked corner fell to him just inside the area but his shot was well saved.  Ivory Coast struggled to get a firm grip on the game and it became a midfield battle. Neither side wanted to give too much away and it was a case of a slow burning match.  Emotions were fore grounded when Zambian defender Mutanga was forced off after damaging his ankle. It was devastating for him and it was nice to see players’ from both sides consoling him as he departed.

It was Zambia who produced the major chances and this time it came from a long throw in. Ivory Coast were happy to see the ball role out for a corner but Zambia kept it in and they headed over from six yards out. The firm favourites were on the back foot and showed very little attacking prowess as Zambia dominated. Just before half time however Ivory Coast mustered up a glorious chance to take the lead. Great work down the right from Gervinho found Yaya Toure who shot wide from inside the area. That was there best chance of the half and they failed to finish much to the displeasure of their coach. Half time came when Zambia dictated the play and they could be very pleased with what they produced in the opening 45 minutes. Ivory Coast needed to step it up a gear and they did begin to show some quality in the final third. Despite their growing confidence in the game they struggled to test Zambian keeper Mweene in the early stages of the second half. The biggest chance of the game came on the hour mark when Gervinho was pushed inside the area and Ivory Coast were awarded a penalty. Up stepped their talisman Didier Drogba. Zambia fans had their hearts in their mouths and they couldn’t believe it when Drogba blazed the ball over the bar. Ivory Coast failed to capitalise on a gift opportunity to take control of the final. As the game began to progress the Ivoirians’ confidence seemed to dissolve after the penalty miss. Both sides were looking for the all important goal but neither side could muster one in 90 minutes. Bring on extra time.

Urgency was needed now from both sides to make sure they didn’t gift the opposition the winner. Max Gradel seemed to breed new life into the Ivoirians and he was agonisingly close after Wilfried Bony’s knock down.  An extremely tight affair in extra time and chances were few and far between, penalties were looming. It did eventually lead to spot kicks after both sides were stuck on stale-mate after 120 minutes of football. With Drogba missing the penalty in normal time it was understandable that he wasn’t chomping at the bit to take another.

Penalties from both sides were spotless as the first seven from both sides were converted with ease. Up stepped kicker number eight for Ivory Coast and it was Kolo Toure. A long run up is always a worrying sign in my eyes and my worries were confirmed when a poor penalty was saved by Mweene. Zambia were now in control of their own destiny and it was Kalaba who had the chance to win the final for Zambia. Unfortunately the pressure was too great for the Zambian and he blazed over. The penalty spot was now destroyed after all the kicks and perhaps the misses were down to a destroyed spot? Both sides got on with the kicks regardless and up stepped Gervinho for Ivory Coast. The Arsenal forward surprised me that he was so far down the pecking order at kicker number nine.  Another terrible spot kick as the forward blazed over and the cards were back in Zambia’s hands once again. Sunzu had the opportunity to seal the win and he made no mistake with an excellent penalty to secure victory.

Zambia dedicated their magnificent victory to those who lost their lives in the 1993 plane crash close to the venue of the final, Libreville. The Zambia players that died that day would have been proud of their country as they tamed the Elephants in a dramatic final. 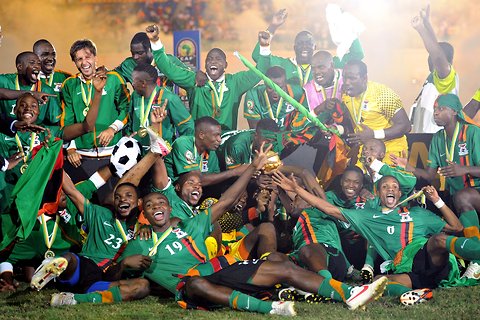 Zambia celebrate after dramatic shoot out