Another 5-star night at Old Trafford

Ferguson’s historical success in the Christmas period left the fans with no objection to sit Welbeck and Rooney on the bench. Berbatov got the nod, partnering Hernandez up front. Carrick was slotted into the centreback position, while Gibson got his first Premier League start this season as the Christmas present. Valencia played in the right back, with Lindegaard starting for the second match in a row.

Having stolen two points from Chelsea and Liverpool, Martinez fielded exactly the same lineup as previous two games. Conor Sammon was supported by Jordi Gomez and and Victor Moses, with Wigan ready to camp at least 7 people behind the midfield line. David Jones played against his former team. In their last visit at Old Trafford, Wigan had two men sent off.

Play of the Game

Manchester United: In 57th min Valencia sprinted forward with plenty of space, passing over to Berbatov, who showed his silky touch to turn the defender and powered a right foot shot to net his second goal of the match, making it 3-0.

Wigan Athletic: In 86th min, Figueroa made an accurate tackle in his own half to stop Berbatov, and brought the ball all the way to Manchester United’s box. He dribbled past Carrick, but couldn’t convert his brilliant run into a consolation goal for the sorrowful Wigan.

Phil Dowd shrugged his shoulder reacting to the Wigan’s protest for the penalty in 77th minute. He must be thinking, “Not three in a row. I don’t want a hairdryer for this year’s Christmas present!”

A pretty relaxing Boxing Day for Ferguson, even encouraged by Manchester City’s draw at West Brom. Manchester United’s 10 goals in 2 games have suddenly diminished their city rival’s advantage in points and goal difference. Sir Alex shuffled the team with the limited squad depth, but the 11 players on field were still sharp and brilliant. Park helped United to a strong start, with fullbacks Evra and Valencia expanding the attacking dimensions and Berbatov again displayed a classy performance. United has restored the early season’s magnificent attacking form.

Martinez would be very unhappy with Phil Dowd decision that left Wigan to be one man down for two-third of the game. Wigan, though, looked very shaky on both end of the court: Alcaraz and Caldwell had been very clumsy; Giggs was found in plenty of space just outside the box at one moment for a shot to be just deflected away; Ronnie Stam’s two dangerous crosses were not contested by attackers. Martinez will surely have a lot to think about before travelling to Stoke on New Year’s eve.

Best Performer of the Game

Dimitar Berbatov.  He is no longer a regular starter, but there is no sign of rust. The Bulgarian once again showed the world the beauty of football, starring in the game with his wonderful skills and delicate finishing. He had earned a well-deserved hat-trick in style. An absolutely outstanding performance, capped by a rarely seen grin from the ”godfather”.

Who could do better?

Phil Dowd. The Staffordshire referee should be the happiest person after the final whistle. He had endured a difficult night at Old Trafford when his major decisions all proved to be wrong. For once he pointed at the spot confidently, Park was indeed tripped outside the box. Merry Christmas Phil. 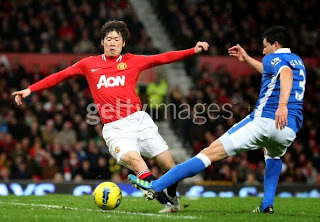 Much to debate, but with little impact to the game