I would 8-2 be an Arsenal fan at the moment! City and United destroy North London Rivals. 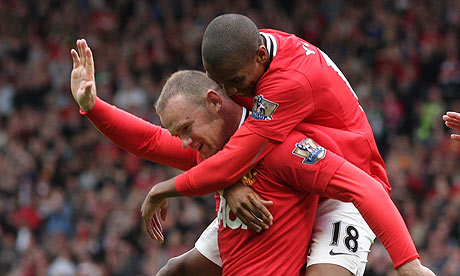 Wayne Rooney and Ashley Young showed why the future is not all doom and gloom for England! Photo: Guardian.

Both teams started the day with six points from a possible six; and before kick off at Old Trafford, United will have known that their City rivals had made it nine out of nine with a +9 goal difference, but anything City can do United can do better!
At White Hart Lane Man City included new recruit Samir Nasri in their starting line-up; and what an outstanding debut the Frenchman had in his first match. However good his debut was, he could not take the limelight from Bosnian Striker Edin Dzeko, who struck four of City’s five goals! Tottenham, who had little to smile about were utterly outplayed by a dynamic, creative and ruthless City side who were very much on top form. They mustered up 22 attempts at goal over 90 minutes as well as dominating possession; and all this away from home.
Despite a 5-1 victory, Carlos Tevez, Mario Balotelli and James Milner were among unused substitutes on the day; demonstrating City’s resounding strength in depth. With so much money spent on players it seems that City’s team is finally reaching its full potential. Roberto Mancini’s Midfield and Attacking options are just as good as their City counterparts. With three goals conceded in three games, you could say the defending has not been at its best, but that is a very minor blemish on what has been a superb start to their 2011/12 Premier League campaign.
So to Old Trafford, where few could have predicted how the battle between Sir Alex and Arsene Wenger would turn out! Arsenal’s troubles of late are very well documented, but that did not stop a relentless United side hammering a very depleted Arsenal side 8-2. Wayne Rooney, one of five United goal scorers, continued his brilliant start to the season with a hat-trick. Ashley Young continued to prove why he is one of England’s best attacking options with two goals and three assists.
Sir Alex Ferguson’s men have started the season by scoring 13 times and conceding three. Danny Wellbeck continued a fine start to what may be a long Man Utd career by scoring once again, before leaving the field injured on the half hour mark. With the score at 6-2, youngster Carl Jenkinson was sent off for Arsenal, adding to Wenger’s bare options. Every player in United’s side played their part in the victory, with Ryan Giggs, Park Ji Sung and Javier Hernandez coming off the bench to make their own contribution.
Whilst were are only three games into the Premier League season, United and City are showing why they are the teams to beat; and it is difficult to predict who may beat them apart from each other! Liverpool’s start to the season is something I will focus on shortly, but for now I consider it relevant to appreciate two simply outstanding performances from City and United. Football in the North West has never looked better; which is more than can be said for North London (at least for today!).
DH