Gareth Bale ensured Tottenham has the best preparation ahead of the North London Derby, potentially a 4th place deciding match. His double, including the exceptional late winner that left Jussi Jääskeläinen helplessly staring at the top corner, inspired Tottenham to recover from trailing 1-2 at Upton Park and moved up to third place of the table, maintaining a four-point cushion over arch rival Arsenal.

Star of the Team

With no doubt the Welshman Gareth Bale. He could not quite get the touch he wanted on several free-kick attempts, but he made sure he connected it properly and beautifully at the end. The man in the form of his life tortured West Ham defenders with his enormous speed and technique. Gary O’Neil, Mohamed Diame and James Collins all got booked in the second half because of the winger, which limited the aggressiveness West Ham could put up in the final minutes to stop Tottenham; another effective and brilliant performance from Bale. 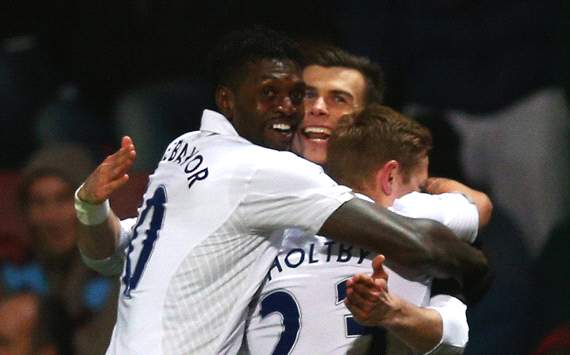 The 37 years old Jääskeläinen has shown no signs aging and has been consistent throughout the season for West Ham. The Finn made a huge double save to deny Sigurdsson and Adebayor, in which minutes later, his team was in front. Gareth Bale twice threatened with his well-adjusted left foot, while Adebayor looked destined to score with a bullet header. However, none of those had beaten Jääskeläinen and only a fabulous strike could leave him dumbfounded. The veteran would have been the man of the match had the final whistle was blown a minute earlier. 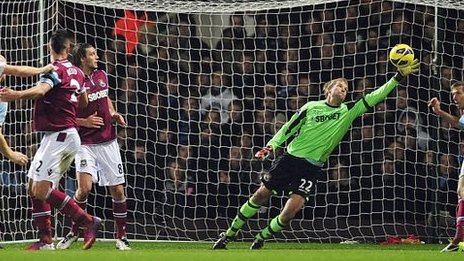 Possibly the most effective substitutions AVB has made this season. Seldom decisive in making in-match changes, the Portuguese did not hesitate this night in taking off Holtby when the score was still level at 1-1. The struggling Sigurdsson was constructive from the minute he joined the game. He forced a fantastic save from Jääskeläinen with the help of the post and eventually grabbed his first league goal for Tottenham. Tom Carroll was also more industrious and energetic than the disappointing Dembele, who had to keep himself under check after an early needless booking. Without a proper striker on the bench, AVB rightly utilised the bench players to regain the control of the away match.

Kevin Nolan was forced off due to injury, and although Matthew Taylor was not quite Nolan’s type which suits Allardyce’s style of playing, he nearly sealed the game with a well-timed run, only to be denied by the determined Hugo Lloris. There was no way back it West Ham went 3-1 up. The questionable move was to take off Guy Demel and introduce Emanuel Pogatetz. Not knowing the reason of the substitution, the fans only saw Pogatetz striving to catch up with Aaron Lennon and looked clumsy to handle the pace at Tottenham’s flanks. Big Sam’s move may sum up the reason of West Ham’s recent struggle — lack of self-belief.

Where should Bale go?

This is not about where he will be this summer, but where he should be played in the field. It sounds stupid to remove him from the free role where he is flying high at the moment. Nonetheless, from time to time Tottenham does not look very fluent with the possession. They could not quite create anything against Lyon, but their best moment against the French was when Bale operated on the left. Bale’s shift to the centre has made up for the lack of creativity in the midfield, but whether this has over-tilted their balance of the attack is questionable. It is always a luxury to have a plan B in the pocket. Gareth Bale grants AVB some choices in tactics. It will now be down to the manager to push the right button at the right time to make the most out of his talents.

You tend to believe Big Sam’s team would have the experience and spirit to avoid relegation in the league anyhow. In fact, quality football from Joe Cole, Andy Carroll and Matt Jarvis was promising, but they will have to show more passion in order to survive in Premier League. While Wigan can be playing better than ever in the final stage of the season, and Southampton is cruising under their new manager Pochettino, West Ham could not find their feet since the 3-1 home victory against Chelsea last December. Being only six points above the bottom three and with Manchester United, Chelsea, West Brom and Liverpool lining up to await for the Hammers, Big Sam has a lot to do in a short period of time to ensure West Ham stay in the league next season (which also determines his next contract). 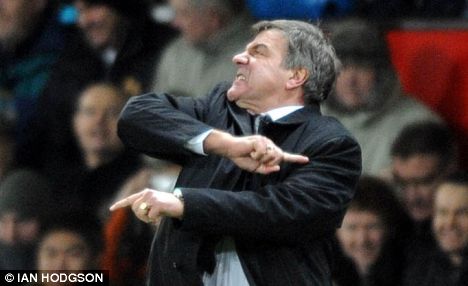 The Only Way QPR Can Survive
Has the North London status quo between Arsenal and Tottenham changed?