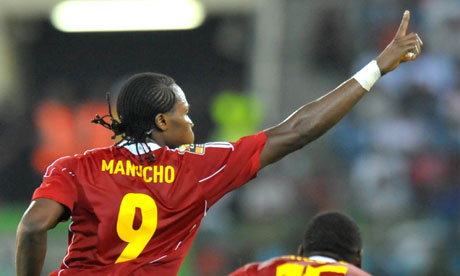 Manucho after scoring the winner

With the other match in group B far from a stand out performance, both these teams had the chance to show what they were all about.

The first half was subdued and I thought both teams were too tentative and tactical, no one was really having a go. As neither of these teams are favourite for the group I wasn’t surprised at 0-0 when it was half time. I got the impression that neither side wanted to leave with nothing.

Angola posed a bigger threat but even they were fairly subdued in the first half which was surprising against Faso. The game cried out for some individual talent to break the deadlock and it was just what the doctor ordered. Poor defending from Faso fell to Mateus just outside the area and he took full advantage. A neat dribble from Mateus to the corner of the box and a sweet strike into the bottom corner, great goal. The game went up a gear after the goal and both teams had to give it a go now. Another goal from Angola and they would top the group for the time being. Faso needed a goal to salvage anything from the game.

As a neutral I was hoping for more goals and I wasn’t disappointed! Faso won themselves a free kick around 33 yards out and up stepped Alain Traore. A goal of the highest quality as he bent the ball over the wall to leave the keeper with no chance of reaching it. A game which was a slow burner at the start had now really heated up and it seemed that the next goal would be the winner. It was eventually Angola who took all three points after former Manchester United and Hull City forward Manucho took advantage of some slack defending. He nipped the ball of Faso’s defence to rifle the ball home on the edge of the box. The goal was another top quality finish from 20 yards with his left foot.

After what began an uneventful encounter, fans were left to reflect on a magnificent second half which produced three spectacular goals. The victory for Angola saw them top the group after the first round of matches. With Angola not meeting favourites Cote D’Ivoire until the final set of group matches they will want to give themselves every chance of that top spot.