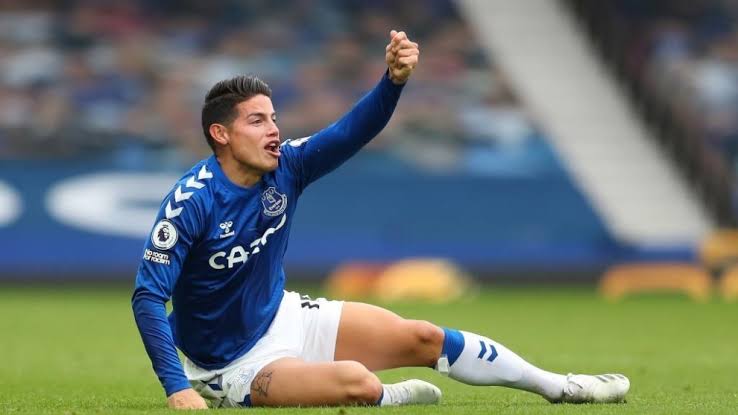 Everton will be without in-form midfielder James Rodriguez for their trip to Southampton after being injured by Liverpool defender Virgil van Dijk during the Merseyside derby last weekend.

Since he arrived at the Goodison Park from Real Madrid during the summer, Rodriguez has been in sensational form with three goals and three assists to fire Everton on top in the league standing.

However unfortunate, the Columbian was fouled by Virgil van Dijk early on in the tempestuous Merseyside derby which ended in a 2-2 draw at Goodison Park.

Although Rodriguez completed the game, he will be out for the Toffees’ trip to St Mary’s as they hope to continue their unbeaten start to the campaign and Everton manager Carlo Ancelotti believes Van Dijk mistimed his tackle against the midfielder.

“He had a mistimed tackle with Virgil van Dijk at the beginning of the game and I think he will not be available for the game against Southampton, ” Ancelotti told the club website.

Van Dijk was later substituted in the game after sustaining a knee injury in a collision with Everton goalkeeper Jordan Pickford.

The Toffees boss, however, said Pickford – and everybody at the Club – wishes van Dijk a speedy recovery from the ACL injury he sustained during the match will could force him out for the rest of the season.

“To be clear, we are really sorry for the injury of Virgil van Dijk. Every one of us hopes he can recover soon and well.

“There was this contact with Jordan Pickford: it was mistimed contact. But the fact the Premier League is so fast, it is not so difficult to arrive a little bit later.

“Jordan arrived a little bit later but his intention was to try to reach the ball. It was not to hurt Virgil van Dijk. To say it was premeditated, and this and that, in my opinion, is too much. Virgil van Dijk knows this.

“Jordan is really sad, really disappointed [that Van Dijk is injured]. It was a strong contact, maybe mistimed, but sometimes in football it can happen.”