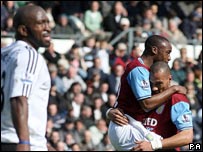 Villa continued where they left off last week against Bolton with an emphatic victory at Pride Park.

After Derby had began the match so prominently it was Villa who took the lead in the 25th minute. An in-swinging Ashley Young free kick from the left was missed by Roy Carroll and Villa were in the lead.

Within a minute the lead was doubled. Carew netted his 10th goal of the season after some sloppy defending.

A poor clearance from Roy Carroll on 36 presented Stilian Petrov the ball just inside the Derby half. He struck a neat left footed strike which flew into the back of the net. This is a sure fire contender for goal of the season and will give the Bulgarian midfielder a much needed confidence boost.

The second half wasn’t much better for the Rams. Carroll could only palm Agbonlahor’s low drive into the path of Barry who slotted into an empty net.

Agbonlahor netted his second goal in a week on 76. A long clearance from Carson presented Agbonlahor with a sight of goal, and he cooly slotted in the bottom corner to put Villa 5 up.

Marlon Harewood, on as a sub for Carew netted Villa’s sixth on 85 minutes.

6 goals, six different goalscorers for Aston Villa. What a difference 8 days makes. 10 goals, none conceded and Europe again in their sights.

This set a new club record for the highest away win in the top flight for Villa.

It is also the biggest away win in this season’s Barclays Premier League and puts Villa as the top away scorers with 33 goals.