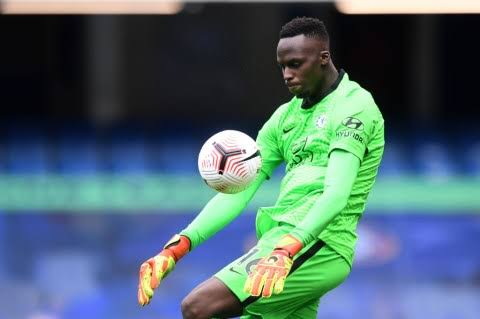 This is coming only a few weeks after Lampard claimed the £22million signing from Rennes was brought in to provide competition for Kepa Arrizabalaga.

However, it seems the Blues boss has now changed his mind after Mendy the Senegal international put up another impressive performance in Chelsea’s goalless draw against Sevilla in the Champions League.

Asked after the match if Mendy was now first choice, Lampard said: “As it stands he is [the number one] but that’s always up for grabs. But the way he’s playing I’m very happy.”

However, Chelsea included former goalkeeper Petr Cech in their Premier League squad on Tuesday with the Blues technical director on hand in a coronavirus-related emergency.

Cech who is a year younger than 39-year-old veteran goalkeeper Willy Caballero had retired from football in the summer of 2019 but the blues boss claimed the decision was only a technical one.

“It’s definitely not done for the romance, Pete enjoys the training, that’s how he is,” said Lampard.

“With Pete it’s something I wouldn’t expect to happen but with how fit he is if we were in crisis we couldn’t have anyone better than Petr Cech around.

“I don’t expect him to play, but nobody expected what’s happened in the last six or seven months, so that would explain why he’s in there. He’s invaluable for his experience, passing that onto the goalkeepers.

“We had a space this year, and Covid makes this a year like no other. He’s very fit, he’s still relatively young, and he finished playing when he possibly could have carried on when he took on the role that he does very well here.

“He trains very regularly and very well. I’m not sure if we’ll see him this season, it depends on how things go of course. But it’s a total no-brainer to have him in the squad for the reasons of the pandemic and everything that’s happened.

“He trains every day, and that can only help the goalkeepers we have, to have one of the best in the recent modern era training with them.”