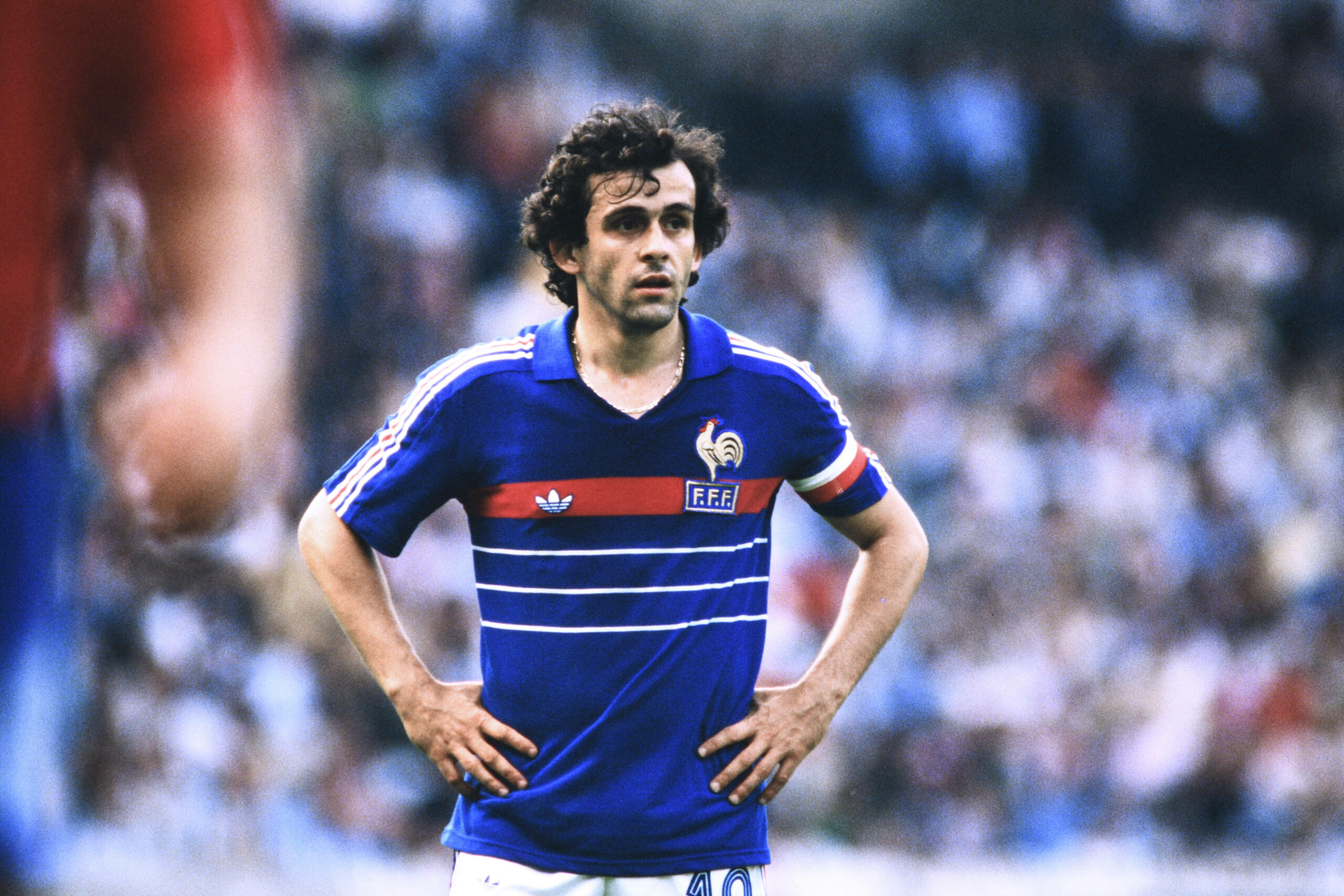 The referee’s clock was closing in on the hour mark. French striker Bernard Lacombe was fouled at the edge of the box by Spain centre-back Salva.

But let’s rewind a little.

Born in the commune of Joeuf in Lorraine, in the north east of France, Platini’s early bouts with football was not promising by any means.

Playing for Joeuf juniors, a 16-year-old Platini once failed a spirometer test during a trial with Metz. The breathing test caused him to faint with the doctor pronouncing his ambition to become a professional footballer null and void, owing to his weak heart and difficulty in breathing.

But as fate would have it, Platini’s father Aldo was a professional footballer at AS Nancy. A position in the reserve side heralded the beginning of one of the most glorious careers in the history of football.

As a dazzling attacking midfielder who could chip in with goals and assists by bucket-loads, Platini gradually rose through the ranks to establish himself as one of if not the best player in Ligue 1.

After seven years with Nancy, with 98 goals in 181 appearances, Platini jumped ships to Saint-Etienne. Although he was brought it to steer the club towards European glory, in his three years there he could only manage to win one solitary league title.

Platini knew that in order for him to conquer the world of football he needed the right stage, the right team and the right league to compete in. Lo and behold, Italian giants Juventus were on the lookout for a new No10 after the departure of the great Liam Brady.

The boy who was told that he would never make it as a footballer was now the star of one of the greatest footballing dynasties.

Platini’s ability to read the game, his astute footballing brain that made him pick out a pass that others would not dare to attempt made him the best player on the planet at that time.

“What a playmaker – he could thread the ball through the eye of a needle as well as finish,” remarked Manchester United and England legend Sir Bobby Charlton after watching him play.

The Stage Is Set

At the international stage, before Platini, France’s greatest triumph was finishing third in the 1958 World Cup.

The 1978 World Cup in Argentina was another disaster as a 22-year-old Platini and Les Bleus were knocked out in the group stage.

However, the one that followed in Espnana 1982 saw them reach the semifinals. In the clash against West Germany, France were 3-1 ahead in the 98th minute of extra time with Platini having scored a 27th minute penalty.

At the end of 120 minutes, the Germans had leveled the scored 3-3 and would go on to win the tie on penalties.

The 1984 European Championships on the other hand set the stage for one of football’s greatest stories. Held on home soil, Platini, now captaining his country, would script history.

Les Bleus opened their campaign against Denmark in Paris. A 78th minute strike from Platini was enough to register their first win of the tournament.

Four days later, they faced Belgium in Nantes. This is the game in which France consolidated their position as the favourites to lift the coveted Henri Delauney trophy. Platini scored a hat-trick as the Frenchmen ran riot in a 5-0 demolition of their neighbours.

The third and final group stage clash saw another Platini masterclass. Yet another hat-trick, this time in a 3-2 win against Yugoslavia, saw Platini end the group stages with an astonishing seven goals to his name.

With only two groups, two teams from each group proceeded to the semifinals. France were pitted against Portugal while Denmark played Spain.

As France and Portugal walked out into the Stade Velodrome in Marseille, the hopes and dreams of 55,000 fans rested on the shoulders of Platini.

24 minutes into the game, France won a freekick at the edge of the box. Portugal goalkeeper Manuel Bento adjusted the wall, anticipating a swinging yet ferocious hit from Platini. However, it was left back Jean-Francois Domergue who blasted the ball into the top corner.

What followed was a tussle for the ball for the next 50 minutes before a header from Rui Jordao brought the scores level. The game went into extra-time.

Portugal started the first period on the ascendancy. Jordao added his second goal of the game to put his country ahead. It was now or never for Platini, the reigning European Player of the Year.

With six minutes left on the clock, Domergue, who was celebrating his birthday, surprised everyone with his second goal of the match. Pandemonium prevailed inside the Stade Velodrome as France believed there was a chance for a winner.

With 60 seconds left on the clock to send France into yet another dreaded penalty shootout, Platini, with his shirt untucked and socks rolled down, yet carrying an aura around him, fired home from inside the box to send his country into the final. The French dream was only 90 minutes away from being realised.

Fast forward to the past

Winning a free-kick just outside the box, Platini’s eyes searched for any weakness in the wall and his Spanish counterpart Luis Arconada’s positioning behind it.

Platini stepped up, wrapped his foot around the ball to send it curling over the wall towards Arconada who fumbled and let it roll past him to give France the lead.

Les Bleus did all they could in search of a crucial second goal cushion. Wave after wave of counterattacks towards the Spanish goal met with strong resilience.

French skepticism was well-founded given their past. Fans inside the stadium did not dare to celebrate until Platini stood on the podium with his arms wrapped around the trophy.

But it happened at last. With seconds remaining in the game, AS Moanco stalwart Bruno Bellone chipped it over Arconada to seal the game. France won the 1984 European Championships.

Decades have passed since that fateful night in Paris. When fans talk about individual performances in international tournaments, a certain Diego Maradona’s exploits often top the lists.

Platini, having scored nine out of the 14 goals that France scored in the tournament in just five games, deserves a mention in those discussions.

Once described as ‘the lead violin in a sophisticated string quartet’, Michel Platini, if not for his various misdemeanours in his latter life in football politics, would have perhaps created a far stronger legacy.

Mbappé and Foden to Hložek and Malen: The best young talents to keep an eye on in every side at the Euros
Morning Mix: Eriksen incident reminds us what is important, England manager demonstrates leadership skills