Turkish referee Cuneyt Cakir was the scapegoat for Manchester United’s exit in Champions League. This time, the Red Devils have no one but themselves to blame. They blew away their two-goals lead at home and was beaten by another big Chelsea’s second half in the FA Cup replay at Stamford Bridge.

An unusual Monday lunchtime kickoff sent the players back in action after only 48 hours of rest, while Chelsea even has the Europa League on Thursday in mind. After the embarrassing defeat at Southampton, Juan Mata, Eden Hazard and Ramires were all back in the starting lineup to supply Demba Ba. On the other hand, Sir Alex Ferguson had the luxury to field fresh Danny Welbeck and Javier Hernandez, while resting Robin Van Persie on the bench and nursing Wayne Rooney’s groin problems. 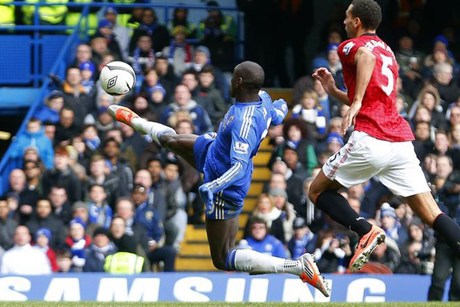 Nevertheless, it was obvious how important their two best strikers are to the league leader. United dominated the first half but was never close to clinical. Phil Jones’s involvement helped ease the workload of Michael Carrick, who played his second game in three days, and also quieted the trio of Mata, Hazard and Oscar, but Nani’s inability to pass could not translate the solid midfield performance into goals. Javier Hernandez had to do it on his own, but his rare long shot was kept out by Peter Cech’s leg, although the Czech looked to have dived to his left a split second earlier than needed. It was the best, and almost the only chance of Sir Alex’s side in the first half.

Chelsea looked yet to rediscover the fluency and confidence in their football. Ashley Cole’s pull-out due to injury further weakened their defence, though luckily untested as Nani was struggling all day long. Ramires and Mikel lost in the battle of possession and there was little scope for their playmakers to create.

Just when one would expect another unconvincing but narrow victory for Manchester United, a quality goal of world-class calibre changed the dynamic of the game. Juan Mata found some rare breathing space and sent a perfectly-measured pass to Demba Ba, who ran over Rio Ferdinand’s shoulder and skilfully guided his first time volley to the far corner, that left the in-form De Gea stand and stare at the ball helplessly.

Three minutes into the second half and Chelsea found themselves in the lead via a goal that came from absolutely nowhere. They needed more than that to make Demba Ba’s goal count and Peter Cech had delivered what they needed. Hernandez beat the offside trap and connected with Danny Welbeck’s cross. He sent his header to the wrong side of Cech, but somehow Cech managed to tip over his header with his left palm while diving to his right. It was a save that amused the stadium and certainly earned more than the appreciative smile from the Mexican forward. 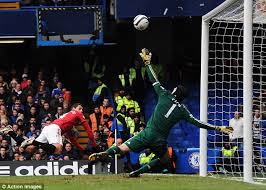 Alex Ferguson pressed on by sending in Robin Van Persie and Ryan Giggs, but it did not sharpen United’s attack at all. Patrice Evra found no companion down the left flank, which was filled up by Tom Cleverley before he was substituted. Moving Phil Jones to the right back left Michael Carrick all alone in midfield, as Giggs was slotted into the free role just behind Van Persie and Hernandez. All of a sudden, Chelsea won back the control of midfield. Mata was liberated and came alive again . He first tested De Gea with a near post shot, then sent an unmarked shot to the wrong side of left post. The increasing pressure had also sent the ever calm-looking Carrick buckled. A poor back lob pass was intercepted by Eden Hazard, who burst through Ferdinand and Phil Jones but wastefully misfired the opportunity that could have sealed the match.

When Alex Ferguson restored the balance of the formation by introducing Ashley Young, there were only ten minutes left for their search of equaliser. They still managed to create two chances, both from left flanks, but there was no Upton Park’s magic this time from Robin Van Persie. The fans would be disappointed by the left-footed volley he missed, the type of shot he has been delivering all year long, while Sir Alex’s late substitution could be even more frustrating.

Twice being the underdog of the matchup, and having just had a miserable Saturday, Rafa Benitez proves once again he is the cup specialist. They have not played the entertaining and pretty football Abramovich has invested for, but determined tactical change and stellar defence were the keys to their success this season in both local and European cups. Having failed to get the better of Manchester City this season, a semi-final victory at Wembley two weeks later may see the fans-jeering target re-emerge as a serious contender for the permanent job at Stamford Bridge.