In a financial crisis but Crystal Palace still come together to inflict another defeat on Posh.

Peterborough United continue to look for their first points in 2010 after another defeat at the hands of Crystal Palace.

Posh met a side in a worse situation than them in the form of Palace after Simon Jordan announced the club had entered administration earlier this week. With ‘the Eagles’ having ten points deducted off their current total it dragged them into the relegation scrap and meant that this game was another crucial one in Posh’s season.

Mark Cooper started off with a 4-5-1 formation, bringing Frecklington into the starting line-up, his only change since the Tuesday night fixture against Preston.  Neil Warnock has a small squad at Palace and Victor Moses, who looks Wigan bound, not having permission to play due to the club being in administration meant that Butterfield, a right-back generally, was played out of position on the right wing for the Eagles.

Peterborough made the brighter start, exerting some pressure on the Palace defence and early on in the match a long range shot from Lee Frecklington, hit low and hard, was saved well by Julian Speroni.

Some poor defending from Peterborough saw Palace also go close to breaking the deadlock, when Williams ran with the ball across his own penalty area he was robbed by Butterfield but his curling shot went just over the bar.

Posh thought they had scored when Chris Whelpdale’s header, from a George Boyd corner, beat Speroni but was cleared off the line by Nathaniel Clyne.

Another chance fell Posh’s way when Chris Whelpdale’s scuffed cross found its way to George Boyd after a clever ‘dummy’ from Lee Frecklington, Boyd’s twisted with the ball but the shot was fairly tame leaving an easy save for Speroni.

Neil Danns gave the home-side the lead in the 28th minute. Palace won three headers in the Peterborough United penalty area and when the ball fell to Danns he produced an innovative acrobatic volley, on the turn, to finish well past Joe Lewis giving the vociferous home crowd something to cheer about after what had been a tough week. 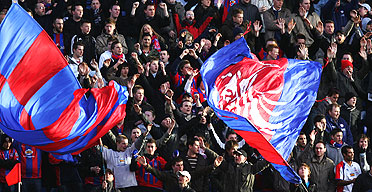 Posh looked a mess at the back after the goal and Palace almost scored a quick-fire double, after a mix-up between Joe Lewis and Ryan Bennett, the centre back dallied on the ball in-front of his own goal, thinking the goalkeeper was coming out to collect it, Neil Danns capitalised, but fortunately for Posh, couldn’t get a shot off before Lewis claimed the ball at his feet.

Another corner nearly gave Posh the lead, but Frecklington’s powerful volley was blocked well by Claude Davies, the volley looked as if it was goal-bound and was going to give Posh an equaliser.

The Peterborough defence once again looked shaky after a ball over the top, found Alan Lee, he used to strength to out-muscle Tommy Williams, but his shot was saved by Joe Lewis.

Palace should have scored their second of the match, when once again poor marking left Danny Butterfield but he showed why he is a defender putting a close range shot over the bar, after a long throw had left him un-marked inside the 6 yard box.

After a spell of sustained pressure from the away side, Mark Cooper decided it was time to go two up-front replacing Lee Frecklington with Aaron McLean and reverting to a 4-4-2 formation. The pressure continued to create chances for Posh but Mackail-Smith wasted one smashing his shot over the bar.

Palace began to create chances for themselves, after a long ball over the top Ambrose was allowed to run through on goal but the pace of Gilbert meant he was able to get back and make a great saving tackle to stop the free-scoring Ambrose doubling his team’s advantage.

It was another long ball that caught Posh napping and allowed Neil Danns to score his, and Palace’s, second of the match. After some poor marking from Ryan Bennett leaving Danns to run through on his own the former Birmingham man casually put the ball past Lewis, into the far post, from 8 yards.

Whelpdale showed Posh hadn’t given up though, his long-range effort testing Speroni but the Argentine goal-keeper was a match to the shot.

After more poor Peterborough defending Danny Butterfield pounced but after rounding Lewis the goalkeeper got back well to get a hand to the shot from a tight angle.

Craig Mackail-Smith, who had once again run tirelessly, was withdrawn by Cooper who brought on the loan signing, Rueben Reid to replace him. Reid looked poor since he was introduced often giving away possession and missing Posh’s best chance to stage a come-back after a long range shot from George Boyd was saved superbly by Speroni, Reid had a glorious opportunity but he couldn’t poke the ball in from 2 yards out, however credit has to be given to goalkeeper for getting a hand on the close-range shot.

Another loss for the Peterborough faithful means there is a lot of pressure on manager Mark Cooper with many calling for him to be sacked, recent games have certainly seen a succession of very poor performances from the Posh who, players and fans, seemed resigned to the fact that they are going down. However, the chairman has recently stated that he is fully behind the manager meaning unless there is a dramatic change in his view-point Cooper will still be in the job for the foreseeable future.

Ferguson’s return to London Road is a happy one as his Preston side beat relegation favourites Peterborough.
Mark Cooper sacked as manager of Peterborough United