In 2003, Roman Abramovich became the owner of Chelsea football club in a high-profile fashion and sparked off a series of foreign investment into football. Since then, the connection between money and football has never been weakened. 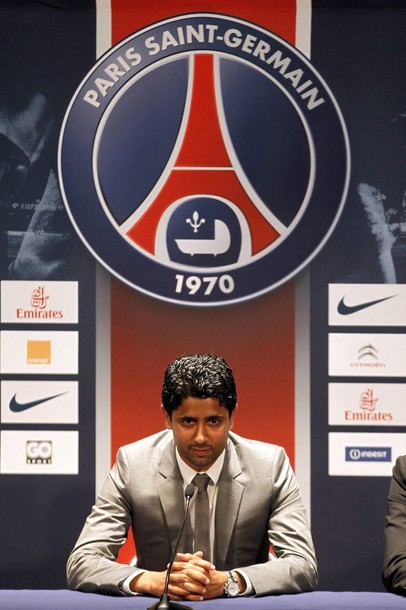 Nasser Al-Khelaifi: ready to raise the profile of PSG

The heightening Eurozone crisis has already hit the football business in Italy and Spain. The English Premier League, though, continues to post record revenues with ever-growing popularity.

However, the dream theatre has a corrupted backstage. Only 5 clubs have had a net profit in 2010-11, while Manchester City recorded the biggest loss in football history – a whopping £197m. Arsene Wenger’s and most recently Sir Alex’s complaints about crazy transfer spending are not only out of bitterness and jealousy. In fact, the Manchester duos, Chelsea, Liverpool, joined by Paris St German lately, have been spending freely with the backup of their wealthy owners.

Their survivals are in contrast to the grief in Portsmouth, Glasgow and, a decade ago, Leeds. Their investments were only returned with short-living fairy tales and finally miseries.

This is why Financial Fair Play was introduced last season, intending to put a halt to overspending and promote a sustainable business model in football clubs. According to the regulations, clubs who wish to join European competitions will only be allowed to make a loss of  €45 million between 2011 and 2014, in which UEFA can impose bans on European competitions from 2014 onwards if clubs fail to comply. Annual losses for clubs are expected to decrease to 8.8 million by 2018.

The born of Financial Fair Play, as it is named, obviously is driven heavily by financial factors, but the benefits will surely extend to development of football, especially for the youths.

To start with, ‘football-related expenditure’, as defined by UEFA, does not include expenses on youth development. The pressure of balancing the account should therefore not be exerted on youth facilities investment. Secondly, it can inhibit the immature introduction of young prospects onto the bigger stage of football. Andy Carroll is the perfect example. Surely possessed bags of talents, he has yet to fully explore his potential but chose to leave Newcastle after only an explosive half-season. The heavy price tag only mounted higher expectation, thus bringing greater disappointment. Lastly, exerting control over transfer fees and wages could avoid overcrowding star players in one single team, enabling youngsters to penetrate info first team. Lukaku and Romeu were two obvious victims last season at Stamford Bridge, they are good players, but they were better bench-warmers.

There are always two sides of a coin. By relating transfer spending with income, it could be even harder for mid-table teams to catch up with the top with their limited potential in increasing revenues. Unable to attract big names, their rebuild duration could be lengthy, as seen with Leeds. Situation could be worsened when top teams expose the loopholes of the regulations. Lucrative though questionable sponsorship deals have been used as a mean to enhance incomes. Manchester United has entered NYSE to increase earnings. In truth, it could be an opportunity as well as a risk to them. Some underlying unfairness, for example the effect of different national tax rates on player wages and the uneven share of TV sponsorship in La Liga, could also ultimately undermine the creditability of Financial Fair Play.

The last thing we want to see in a football professional

Obstacles are everywhere, but this is a policy that has to be enforced. Investments have improved football, but they have also started to overpower football. The rumours about the Qatar investors pulling out in Malaga have already disjointed the team, who is just about to begin their bid to become an international entity. The amount of debts incurred by the top-earning clubs is ridiculously worrying as well.

The Bundesliga and Ligue 1 may not be as popular, but rules similar to Financial Fair Play have brought the clubs much healthier finances and the emergence of home-grown players who are starting to flourish even on the international stage. Seeing the success of Frenchs and Germans, as well as the encouraging signs of diminished (or self-disciplined) spending by some of the top teams, we hope UEFA could endure the persistence in advocating financial self-sustainability to avoid the spirit of football being destroyed.