Germany already have one foot in the final of the 2012 European Championships.

It doesn’t take an economist to see that there’s way too much money floating around in English football these days. For all of the benefits that huge financial investment has brought to the English Premier League over the past decade (most notably being crowned as ‘most entertaining’ league in the World), there are also a number of significant disadvantages that have developed. In my opinion, the most disconcerting of these disadvantages is the current state of the English national football team. Never before (I believe), have Three Lions fans held such low expectations and regard for England and its prospects at a major tournament. Realistically, how well do you think that we’re going to do in 2012? Recently Manchester City published an annual loss of £197 million (biggest in English history), while a few months back Chelsea LTD announced that their debts stand at £726 million. Debts are rife throughout the Premier League, extortionate amounts of money being spent on foreign talent and highly over-inflated wages. Indeed, all of this dollar means that I can see the likes of Sergio Aguero, Fernando Torres and Marlon Harewood week-in, week-out. However, can you really name one exceptionally talented English player that we’ve produced over the last five years (maybe Jack Wilshere as the exception)?. Let’s be honest, the answer is no. Now let’s compare this situation to the situation nearer central Europe, Germany.

In Germany, each team requires a “licence” to play in the two top Bundesligen. Without this licence you can only participate in the regional leagues. To obtain this licence, the team must be ‘financially healthy’ (e.g. not in debt), and also meet other social conditions (see Google for details). This automatically discounts most Premier League teams. Obviously, these comparatively stringent financial regulations have significant knock-on effects upon wages and transfers (less money to spend on these), and also upon ticket prices which are much lower than Premier League ticket prices. Lower wage prices mean that the crop of foreign talent in the world is not attracted automatically to Germany, instead, focus is spent on home-bred players. Matchday squads in Germany must have no more than 5 non-EU representatives, therefore more chance of matchplay for younger Germans. Furthermore, each team is OBLIGED to have an academy, an academy where each class of players must feature at least 12 youngsters eligible to represent Germany. Germans therefore start training their youngsters from a notably earlier age. All of this just to gain a “license” to play in the Bundesliga! Why worry about all of that when you can pay £200,000 a week to see Sergio Aguero notch up goals week-in, week-out! 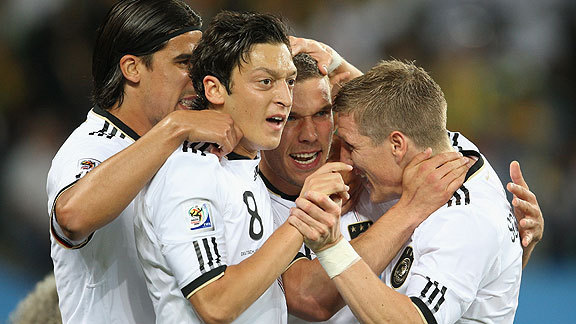 The reason is simply the crop of German players representing their country at this moment. The average age of the German national football team (those that played in the EC qualifiers), is approximately twenty four. Germany won each of their 10 qualifiers, scoring 34 goals, conceding just 7. These players may be earning a lot less money than Wayne Rooney, but they certainly represent a much more exciting national team. Just look at the players that they have: Manuel Neuer (GK), Philip Lahm, Mats Badstuber, Jerome Boateng, Mario Goetze, Sami Khedira, Mesut Oezil, Thomas Mueller, Mario Gomez, Bastian Schweinsteiger, Toni Kroos, Marco Reus. These are just a number of exciting (mainly young) players that represent Germany, and this list doesn’t include the likes of Klose, Podolski, Mertesacker, or Ballack, all of whom I believe will be second choice players at the Euros. Consider the amount of goals that both Klose and Podolski have scored, the experience of Ballack, yet they probably won’t be in the starting 11. Goetze or Walcott? Mueller or Wright-Phillips? Schweinsteiger or Parker? Oezil or Rooney? And the easiest choice of all, Lahm or John Terry as captain?

Look at the Englishmen that we’ve produced over the last five years, and then look at what the Germans have nurtured. I love the Premier League, and I watch it every week, and I’m very proud of it. But do I believe that England will do better than Germany in the Euros? Not a hope in hell. My prediction is that the Germans will win it, hands down.