Italy Euro 2012: Prandelli A Move Away From Azzurri Glory

It is always tricky to face the same opponent for the second time in a major tournament. It gets even trickier when you have been rotating between two different formations in the tournament. Unfortunate for Prandelli, he may have gambled on the wrong side this time.

After starting Euro 2012 with a 3-5-2 formation, dropping De Rossi to centreback, to get two draws against Spain and Croatia, Prandelli switched back to the diamond 4-4-2 and never looked back. The success of the formation was highlighted by Pirlo’s orchestration of the midfield. 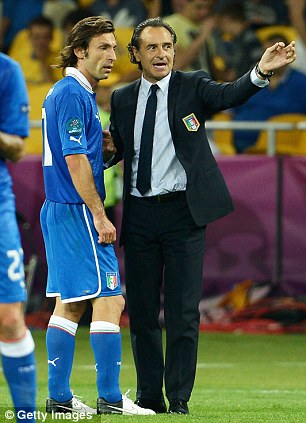 Instrumental until the Final

Heading to the final, Prandelli decided to bank on the confidence of the squad to demolish Spain’s hope of making history. He chose to go for glory rather than passively giving away grounds to his opponent.

This is an understandable decision, well justified when Montolivo linked up with Balotelli no less than twice in the first half, and Di Natale got the best chance of the night early in second half. When Italy pushed for goals, they showed they have the ability.

However tactical the Italian manager is, he may have missed out two important facts.

One is that Spain had not conceded a goal in the knockout rounds of major tournaments for a long time; the other is Spain has a different mentality than Germany, because they have been here before. Italy has got an upper hand in head-to-head statistics, but for certain it means little against the Spanish than the Germans.

When Thiago Motta came on for Montolivo, it was a move to revitalize the squad rather than a tactical move.

Rather than starting Montolivo, perhaps Prandelli should have gone with Motta or Nocerino in the first place. It was expected that Spain would be crowding the midfield again, uncomforting Pirlo with limited space to operate. Italy should turn to work rate and energy instead of creativity in midfield.

Besides, by starting a more defensive midfielder, Italy has the flexibility to switch between the diamond 4-4-2 and 3-5-2 they had once tasted success against Spain. When Abate and Chiellini roamed forward, De Rossi can drop back to form a three men backline, but Pirlo will still have protection from Marchisio and Motta (or Nocerino). This could also minimise the impact of being outnumbered in central midfield. 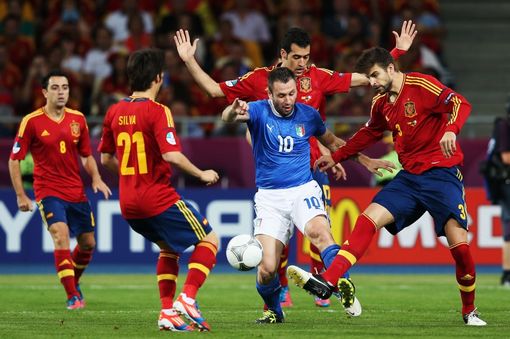 Italy had still played remarkably in the first half, but Spain was able to beat Italy with a higher tempo of attack. Unfortunate injuries showed that luck was not with the Azzurri, but would the momentum of the game be changed if Italy focused on what they are best at? The question mark will live forever with this statement.

Euro 2012: Spain following the Barcelona blueprint. True, or false 9?
Euro 2012: The Tournament where Italy’s ‘Super’ Mario Balotelli matured from a boy to a Man